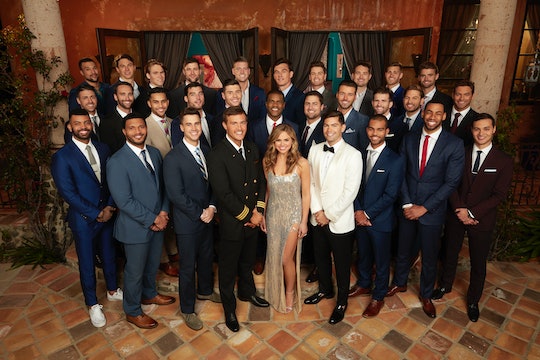 Every season of The Bachelorette has at least one injury. I'm not sure why appearing on a televised dating competition is so dangerous, but I guess it happens. On Becca Kufrin's season two suitors wound up in the hospital when one fell from his bunk bed (relatable), and the other was hurt during football. So who gets in the ambulance on The Bachelorette this season? Because you know it's gotta be someone or it's probably not good TV.

I have to be honest, my friends, I've watched the ABC promo that features clips from this episode in order to find out exactly who the blurred face is on that stretcher. Here's what I've come up with: A lot of the guys vying for Hannah's heart look a little too similar. Thank the internet gods for the pause and play functions, because around the 10th time — after eliminating the men it probably isn't — my theory is that Kevin is the one taking a ride in the ambulance this season. Take this with a grain of salt because, again, it's only a theory based on my semi-poor eyesight. His ABC bio stated he wants to travel more "but he won't go anywhere that doesn't have an available gym." That should tell you his level of fitness. I'm thinking there must be some serious testosterone at play here.

The accident apparently happens when the guys are playing a round of competitive rugby. I'm sure the winner would get one-on-one time with Hannah, so naturally, it's going to be a brutal fight. Rugby is known for being a pretty physically aggressive sport anyway but when you add the (potential) love of a beautiful woman in the mix and somebody is bound to get hurt. This time it looks like it was Kevin, but I can't say for sure.

This isn't even the first injury of the season. In a rollerblading date that went slightly awry, Dustin got hurt. But he also got a rose so all's well that ends well I suppose.

And in another recent episode Hannah, herself, was the one in the hospital. It's not entirely clear why, and all Hannah said about it was that she "passed out soon after waking up that morning." They gave her fluids and told her to rest and that was that. Luckily, she seems fine now. She assured Connor, her date for the day, she wasn't contagious so maybe the stress of finding love had been taking its toll. Being America's most eligible women with dozens of hot guys fighting over you isn't as easy as you might think, you guys.

Whether my theory proves to be true and Kevin is the one who gets a trip to the hospital after a physically aggressive game of rugby remains to be seen. All I know for sure is these guys aren't messing around when it comes to getting their time in from the one and only Hannah — but nobody has to get hurt, fellas.