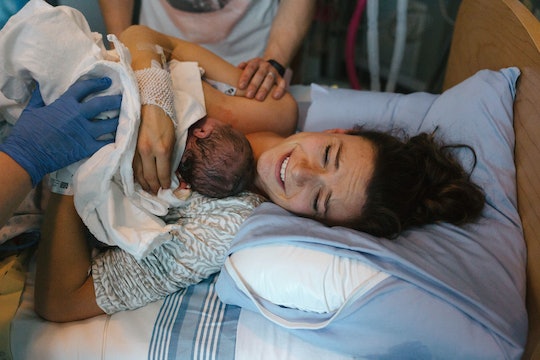 Who Gets To Experience Birth Euphoria?

During Denise Georges’ 40-hour labor, culminating in two hours of pushing, she refused an epidural or any medical pain relief. Rather than excruciating pain, she remembered that during “the moments between the most intense contractions, I literally left my body. It was that ‘runners high,’ that dreamlike state where I was almost floating in another world.” When it was all over, as she held her baby in her arms, she thought, “Wow! I want to do that all again, immediately!” When I first came across “birth euphoria,” experienced by women like Georges, and discussed on message boards devoted to the subject, I was confused and intrigued. Having recently begged for and received the merciful numbing relief of an epidural when I had my daughter, I wondered whether the word euphoria had a second meaning I didn’t know about. I read on to see post after post replete with sanguine tales of birthing bliss, accompanied by beaming pictures of mothers with their newborns. The vast majority of these women had refused pain-relieving medication. Did these women, who described feeling joy and exhilaration during or immediately after birth, know something I didn’t? Would refusing the epidural have resulted in me transcending into a new realm of ecstasy?

More Like This
Lightning Crotch Can Actually Tell You These 7 Things About Your Pregnancy
Your Guide To Swimming Postpartum
Woman Who Didn't Know She Was Pregnant Gives Birth On Airplane To Healthy Baby
Postpartum Sex Pain: Why It Hurts & What You Can Do

Some women say yes; avoiding medication and having an unmedicated birth can result in a feeling of euphoria. Dr. Sarah Buckley, a family physician and author of Gentle Birth, Gentle Mothering, told me by phone that “one of the reasons for [that sense of euphoria] is that the processes of natural birth, a birth without drugs or intervention, are designed to activate pleasure and reward centers in the mother’s brain.” Buckley, a mother of four, has experienced birth elation firsthand. After the birth of her fourth child, Buckley felt like she’d “won an enormous lottery twice. I was just incredulous. I could hardly believe how good it felt.”

Advocates of “natural” birth — without analgesia — believe that naturally produced hormones reduce the stress and pain of childbirth. Buckley contends that birth euphoria is caused by these hormones, which increase during labor and peak after birth. The major birth hormones work together to help the mother during birth and breastfeeding. One of these hormones, oxytocin, is naturally produced by the body to induce labor contractions. Buckley says that oxytocin simultaneously is released in the brain to relieve stress and pain and activate the brain’s pleasure and reward centers, as well as to switch on instinctive maternal behavior. According to Buckley, oxytocin’s release in the brain can have powerful effects, including euphoric birth, orgasmic birth (more on this later), and painless birth. Likewise, Buckley says that hormones called beta-endorphins increase throughout labor and act as a pain reliever, inducing a sense of pleasure similar to “addictive opiates.”

The sense of euphoria when holding one’s baby for the first time is not exclusive to unmedicated births.

Others in the medical community are skeptical of “euphoric births” where they are tied to the “natural” birth movement. Dr. Amy Tuteur, OB-GYN and author of Push-Back: Guilt In The Age Of Natural Parenting, told me by phone that euphoric birth is likely “a figment of people’s imagination.” According to Tuteur, euphoric birth and orgasmic birth were first described in the ‘90s. “If [euphoric birth] really happened, we should have heard about it from other times and places and cultures. But the only place you hear about [euphoric birth] is from privileged white women in Western countries who have read natural childbirth literature.” Tuteur dismisses the unmedicated birth movement as just another example of “how we’ve always treated women: their pain doesn’t matter. You deserve to suffer that pain.” She contends that the science marshalled by natural birth supporters is made up and lacks data. “It’s not a natural phenomenon, it’s a cultural phenomenon.”

“Natural” birth supporters, such as Buckley, believe that epidurals, inductions, and c-sections diminish the body’s innate ability to regulate itself during birth. According to Buckley, epidurals obstruct oxytocin levels, reducing the positive sensations of calming, pain relieving, and bonding that oxytocin produces. She also says that Pitocin, a drug used during inductions, causes stronger contractions than the body naturally creates, and produces an unnatural amount of stress. C-sections, Buckley writes in her e-book, Ecstatic Birth, “result in a shorter or absent labor, and the peaks of [the major birthing hormones] are absent or reduced.”

Tuteur disputes all claims related to euphoric birth. She says that painless labor “is a matter of luck” and that “everyone feels [euphoria] when they hold their babies for the first time.” The sense of euphoria when holding one’s baby for the first time is not exclusive to unmedicated births.

Jordan Lanczycki received both Pitocin and analgesia during her daughter’s delivery. She says she received an epidural, watched an NBA championship game, and delivered approximately 90 minutes later. She describes a feeling of pure ecstasy as they laid her baby on her chest, recalling that “everything else around me disappeared in the background. They had to put stitches in because I tore, but I literally had no idea!”

Jenna Fletcher was induced for preeclampsia, and was in labor for 40 hours with 11 failed vacuum attempts and close to a fourth-degree tear. During this painful process, she received an epidural 24 hours into her labor, but it failed. “I felt everything,” she says. Despite the immense pain, Fletcher says that when she finally held her daughter, “I felt like a superhero — invincible. This wave of absolute peace and joy washed over me and there was no pain, nothing. Just me and this little pink person and perfect total happiness that I have never felt before or again.”

Being a mother is really, really hard. So why are we making it even harder by setting up these false expectations?

Tuteur worries that the ideology espoused by natural birth supporters can be harmful to women by exalting and encouraging more painful experiences. “Being a mother is really, really hard. So why are we making it even harder by setting up these false expectations? It’s not just childbirth, it’s breastfeeding, handmade baby food, all these things united by one factor — it’s always more pain and more work for mothers.”

Some mothers feel empowered by the movement, finding their unmedicated birth experiences to be much more positive than those that happened with medication or surgery. Jane Proust had a c-section for her first child. Before her second pregnancy, Proust took a doula course which she says showed her “how beautiful birth can be.” This helped convince her to attempt a VBAC. Proust described feeling ecstasy during the unmedicated birth of her second child. It was “as if the lines between worlds disappeared. I was just oozing love.” The contrast between her two births has made Proust sad and regretful about her first delivery. “I grieved a bit after this last birth about my first birth, knowing how different it could be. My first daughter was breech and I wasn’t given any other options.”

Some women even claim they experience orgasms at birth. “Orgasmic birth highlights that birth is a sexual process,” says Buckley. “The buildup of hormones that occurs is similar to an orgasm, there’s the same pattern of release. There are huge peaks of oxytocin released from the brain that help push the baby out.” According to Buckley this activation of the reward and pleasure centers of the brain is part of the natural hormonal process of birth. Buckley notes that an integral part of a euphoric or orgasmic birthing experience is an undisturbed birth, which can help create the optimal setting for the hormonal processes to unfold. She writes that the conditions needed for the hormones to unfold in birth are the same conditions necessary for the hormones to unfold in sex: that the women feels private, safe, and undisturbed. In other words, soft lighting, relaxing music, and the presence of a partner nearby.

Tuteur dismisses orgasmic birth as lacking a scientific foundation. She understands claims of orgasms during birth to be the products of insecurity and one-upsmanship: “Not only did I tolerate the pain, I had an orgasm, too!” Tuteur stresses that women should not delude themselves as to the incredible pressure and pain involved in childbirth, so that they can be prepared and make informed choices.

Talking to these women and experts for this story made me reflect on my own birthing experience. Despite it including a sterile hospital room, Pitocin, an epidural, and a male attending doctor I’d never laid eyes on before he helped me deliver my daughter into the world, I realized I wouldn’t have had it any other way. I felt no pain at the end (before the epidural was another story) and my baby came out healthy and whole. The women I talked to felt the same way about their unmedicated birth experiences. Different processes but similar results. As long as women are making informed choices, the end product — holding a healthy baby — should feel pretty amazing.