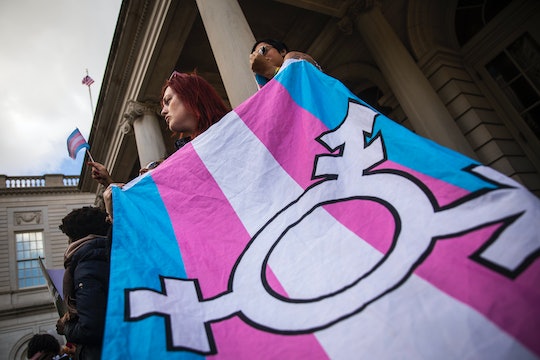 Transgender people face a long list of social stigmas, especially where it concerns assumptions made about their mental health. Some organizations are working to fix this ongoing problem, including the World Health Organization (WHO). In a long overdue update, WHO will no longer classify being transgender as a mental disorder in its global manual of diagnoses, according to CNN. Not only does the change dispel a major and harmful myth about being transgender, but its the right step needed to give trans people the respect they deserve.

As the United Nations' health agency, WHO sets the standard for health concerns around the globe. And given the organization's esteemed reputation, it's a pretty big deal that it approved a measure on Saturday, May 25, for "new diagnostic guidelines that no longer describe gender nonconformity as a 'mental disorder,'" according to Human Rights Watch.

Although the change was issued last summer, it wasn't formally approved until the vote on Saturday. It will go into effect on Jan. 1, 2022, as a part of the 11th revision of the International Statistical Classification of Diseases and Related Health Problems (ICD-11) chapter, according to CNN.

To sum up the important changes, WHO will now refer to being transgender as "gender incongruence" instead of a "gender identity disorder." Gender incongruence, as defined by WHO, is a “marked and persistent incongruence between an individual’s experienced gender and the assigned sex," according to the BBC.

Additionally, gender incongruence has been moved out of the mental disorders section in the ICD to the sexual health conditions chapter, according to Forbes.

"The rationale being that while evidence is now clear that it is not a mental disorder, and indeed classifying it in this can cause enormous stigma for people who are transgender, there remain significant health care needs that can best be met if the condition is coded under the ICD," WHO said about the landmark change.

The sentiment behind this change can't be understated, especially for the millions of adults and countless kids who identify as transgender. For too long, anti-trans groups have tried to deny the existence of transgender people by putting forth the false argument that people are transgender because they suffer from sort of mental health disorder. Although transgender people can suffer from health conditions like anxiety and depression, as is often the case for marginalized people, their identity doesn't make them mentally ill, and this is a very important distinction to make.

The American Psychiatric Association also agrees with this sentiment, noting that it now uses the term "gender dysphoria" instead of "gender identity disorder."

“Part of removing stigma is about choosing the right words. Replacing ‘disorder’ with ‘dysphoria’ in the diagnostic label is not only more appropriate and consistent with familiar clinical sexology terminology, it also removes the connotation that the patient is ‘disordered,'" the APA explained on its website.

It's no secret that stigmatizing transgender people can lead to violence and attempts at conversion therapy, to name a few serious dangers. WHO's change, although overdue, is a step in the right direction to protect the rights and dignity of transgender people across the globe.