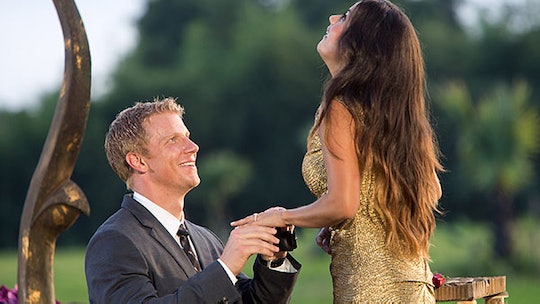 Not Every 'Bach' Duo Has Sex In The Fantasy Suite

The fantasy suite dates are a tried and true part of every Bachelor (and Bachelorette) season. Typically, these dates play out near the very end of the season, with the final three contestants being invited for an ~intimate~ evening after hometown dates. (The exception was Kaitlyn Bristowe's season, in which the overnights were held prior to the hometown dates because of Kaitlyn's pre-fantasy suite tryst with her runner-up Nick Viall.) Obviously, the implication of a private, off-camera overnight date is that sex will happen. But there are several contestants who haven't had sex in the fantasy suite on The Bachelor.

The question of which couples in Bachelor history didn't use the fantasy suite for its intended purpose is a particularly relevant one at this point in the season. When we left off with last Monday's episode, Nick was about to head in to his last rose ceremony prior to the overnights. Nick's got one of the more colorful Bach Nation sexual histories, between his dalliance with Kaitlyn outside of the prescribed sex-time and his pseudo-slut-shaming of Andi Dorfman after the two of them did sleep together in the fantasy suite (before Andi chose Josh Murray over him in the finale).

In past seasons, the Bachelor or Bachelorette's number of fantasy suite sexual encounters obviously varies, and understandably the majority of them remain mum on the specifics. The season's star might have sex with as few as zero or as many as all three of their contestants. But several stars and contestants have been vocal about not having sex in the fantasy suites.

For some, like Season 17 Bachelor Sean Lowe and Season 8 Bachelorette Emily Maynard, it was a pointed decision not to have sex while on the show. For Sean, he "wanted to use that night, alone, without any distractions, to really connect with the women," as he wrote in his memoir For The Right Reasons. Maynard opted not to have sex with any of her contestants to set an example for her young daughter. Season 6 Bachelorette Ali Fedotowsky said in a 2013 interview that she "only got physical with one person" (Roberto Martinez, the man she ended up choosing). Becca Tilley, a contestant on Chris Soules' season, was a virgin when she appeared on the show and confirmed via live-tweeting that she and Chris hadn't had sex in the suite.

Though Trista Sutter, the very first Bachelorette, didn't come right out and say that she hadn't had sex with anyone in the fantasy suite, she echoed Sean's words about the importance of getting uninterrupted private time.

For the purposes of Bachelor Season 21, I'm gonna go ahead and guess that Nick will have sex with most, if not all, of the women who make it to his final three. After all, he's been billed as the first sex-positive Bachelor, has obvious sexual chemistry with all of the remaining women, and none of his last four contestants have voiced wanting to hold off on sex. I mean, Nick and Raven Gates were literally making out, hot and heavy, while rolling around in mud.

Which totally could've been filled with leeches and snakes, by the way. Safe to say, they seem ready to take that next step.