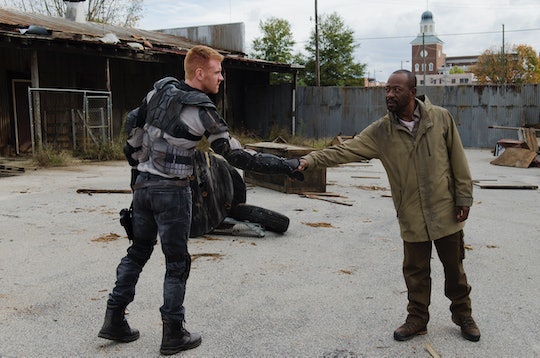 Who Helped Morgan & Carol? Thy Kingdom Has Come To 'The Walking Dead'

Wow. There is really no other word to describe The Walking Dead's Season 6 finale. There was blood, there was a bat covered in barbed wire, and there were boys in paintball gear. Oh, did you miss that last one because you were too busy worrying about Daryl? Understandable but it essential to know who helped Morgan and Carol after the defeated the stalker Savior.

To TV viewers, these two new characters were just two guys who happened to be in the right place at the right time (and wearing an obscene amount of body padding.) But to readers of the comic book series, they were knights in paintball armor who represent a new group that may — or may not — come to Alexandria's aid.

The Kingdom, which is introduced shortly after Negan's arrival, is another group trying to survive the zombie apocalypse. And, much like Alexandria and The Hilltop, they don't like Negan. In fact, Jesus informs Rick of The Kingdom's existence in hopes of building an army against the bat-wielding sociopath. But there's one trait that seta The Kingdom apart from any other group we've met — they try to avoid violence unless one of their own is threatened. But that doesn't mean they're boring. In fact, the leader of the group has a tiger. How badass is that?

However, this isn't fans first introduction to the new group. According to ComicBooks.com, viewers were given a glimpse of The Kingdom in the penultimate episode, "East." On their search for Carol, Rick and Morgan approached an abandoned farm when they heard a rustle behind one of the buildings. A man in sporty body armor emerged, saying he was looking for his lost horse. Rick, being the untrusting leader, immediately took aim and tried to fire. But Morgan, believing all life is precious, put an end to the attack and ended up saving the man's life.

And now it seems the man has come back to return the favor. Will Carol and Morgan be knighted into The Kingdom and come to the aid of Rick & Co.? Sadly, you'll have to wait till The Walking Dead Season 7 returns. That or, you know, read the comic books.