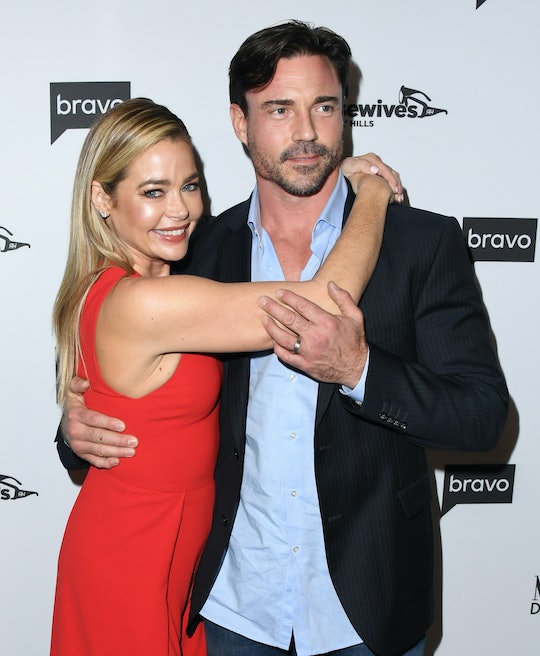 The Real Housewives of Beverly Hills is back in full swing, and although Puppygate seems poised to overshadow most of Season 9, there is a wedding taking place this season, too. Freshman Housewife Denise Richards got married last September and her nuptials are featured on the show. Since the couple met less than a year before getting married, RHOBH fans may be wondering who Aaron Phypers is exactly. For starters, he has a very famous ex-wife, with whom he was stuck in a prolonged divorce proceeding.

Aaron quietly married Desperate Housewives star Nicollette Sheridan in 2015. In fact, news of their marriage wasn't publicized until TMZ uncovered that they were filing for divorce just six months after tying the knot. Per TMZ's report, the split wasn't particularly messy: Sheridan would keep her Hidden Hills, CA home and her horse Leo, while Aaron would keep his personal belongings, bank accounts, and cars. Neither party was asking for spousal support. It's unclear why, then, it took two years for their divorce to become finalized in August of 2018. As TMZ pointed out, Sheridan and Denise were actually neighbors, and so the timeline on Denise and Aaron's relationship is contested for obvious reasons. For example, TMZ reported that the pair began dating in September of 2017, whereas Bravo's The Daily Dish puts their relationship start date at December of 2017.

Us Weekly reported that they were engaged as early as January 2018, but news of the engagement didn't break until September. They were married just days later. If nothing else, it seems like Aaron has mastered a command of keeping relationships on the DL.

Obviously, Denise and Aaron's September wedding was anything but low-key, considering Bravo cameras captured it to air on RHOBH. It's a pretty splashy entrance for a first-year Housewife, but considering her high profile, it's definitely well-earned.

"I am so happy to officially be married to the love of my life," Denise told The Daily Dish in a statement. "I can't wait for everyone to go on this incredible journey with me this season on The Real Housewives of Beverly Hills. It has been a wild ride so far!"

Aaron doesn't have any children of his own, but he's stepping into a very blended family. Denise has two kids with her ex-husband Charlie Sheen, to whom she was married from 2002-2006. Their daughter Sam is 15, while Lola Rose is 13. Denise also adopted a third child, seven-year-old Eloise Joni, by herself in 2011. All three kids stood up in Denise and Aaron's wedding and they even posed together for the family Christmas card last year, per Refinery29.

As for what Aaron's job is, viewers get a little insight into what he does for a living on the show, where Denise tries her best to explain that he's an energy healer. The whole thing is very woo woo, so it's a little difficult to understand, but he does own his own energy healing center in Malibu called Quantum360. It's where Denise says they met and she now serves as the center's media advisor, according to the website. You can watch the budding relationship unfold and hear more about Aaron when RHOBH airs Tuesday nights on Bravo.