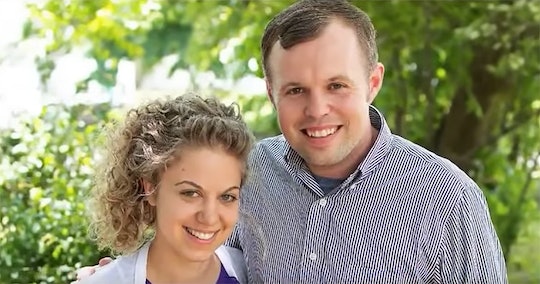 Here's How Abbie Burnett's Family Stacks Up To The Duggars

It's never a dull moment in Counting On universe. Case in point: following a string of Duggar births, John-David Duggar announced his courtship with a 26-year-old woman named Abbie Burnett. And if that name doesn't sound familiar to you, you're not alone. To Duggar's credit, he kept his romance with Burnett on the DL prior to the announcement, which means fans are completely in the dark about Burnett's life. People have a lot of questions about Abbie Burnett's family, for instance, and they want to know if the clan is anything like the Duggars. So, what's the deal with Burnett's home life? As it turns out, Burnett's family is very similar to the Duggar brood.

Back in April, rumors swirled about Duggar's dating status. Although a courtship was never confirmed, there's a good chance Duggar was in the process of establishing a relationship with Burnett at the time. Way to keep fans guessing, Duggar.

Now that Burnett's identity is out in the open, Counting On fans are slowly starting to learn more about her life. And one of the main points of interest concerns Burnett's family and their values.

In a not so surprising twist, Duggar knew the Burnetts for "several years," before the courtship, according to People. In fact, Burnett's dad, John Burnett, reportedly appeared on a TLC special featuring the Duggars called, "Raising 16 Children." Of course, it's very common for the Duggars to date within their circle of family friends — just ask Joy-Anna and Josiah Duggar.

As for Burnett's siblings, she has three brothers and four sisters. If there is any big difference between the Burnetts and the Duggars, it's the size of their families. Jim Bob and Michelle Duggar have 11 more kids than Burnett's parents, John and Cheryl Burnett.

The families share a major similarity, however, where it concerns religion. The conservative clans both follow ATI, "a Biblically-based home education program for families who desire to raise up sons and daughters who are “mighty in Spirit” and able to impact the world for Jesus Christ," according to program's website. And fans probably won't be surprised to learn that the Burnett family is prominently featured on ATI's website. "ATI is a constant encouragement to love God with all our heart, soul, mind, and strength and to see all of life from a biblical perspective," the Burnett family said about the program, according to ATI's website.

Additionally, the Burnett family also subscribes to controversial religious leader Bill Gothard's Institute in Basic Life Principles, a program dedicated to "introducing people to the Lord Jesus Christ, and is dedicated to giving individuals, families, churches, schools, communities, governments, and businesses clear instruction and training on how to find success by following God’s principles found in Scripture," according to IBLP's website.

If all of this religious speak doesn't add up for you (it can be confusing, I know), what is important to note here is that the Burnett and Duggar families are quite similar. It seems as if the Duggars only date within the IBLP circles, with the exception of Jeremy Vuolo and Ben Seewald. Both Vuolo and Seewald didn't grow up with IBLP in their lives.

If Duggar and Burnett get hitched, it will be interesting to see if they have a large family. While IBLP encourages big families, Burnett's family is somewhat average-sized. It's definitely possible Duggar will follow the Burnetts' lead by opting for a smaller brood. You never know.

Either way, fans can't wait to meet the Burnetts via Counting On. Although it's not clear when the fam will make its debut, there's no denying people are excited to learn more about them.