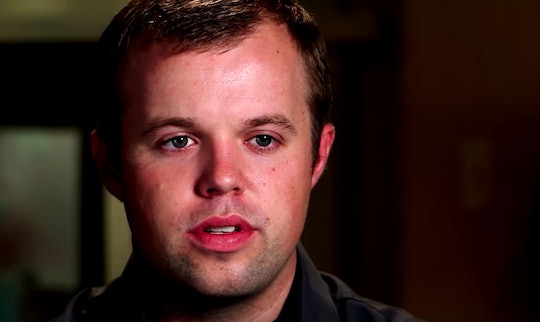 Those of us who are familiar with TLC's 19 Kids & Counting and Counting On know all too well that the Duggars approach relationships a bit differently than the average family. Their extremely conservative Christian beliefs don't really jive with the traditional concept of dating. Instead, Michelle and Jim Bob's children enter into approved courtships — or "dating with a purpose." During a courtship, a couple gets to know each other better with the end goal of marriage in mind. All interactions are chaperoned, and side hugs are the only type of physical contact allowed until engagement. One Duggar sibling in particular who has been left out of courting through the years is John David. So who is Abbie Grace Burnett? John David Duggar is officially courting her.

Brace yourselves — because yet another Duggar is off the market, folks. On Tuesday, the Duggar family announced that John David, 28, has entered into a courtship with Abbie Grace Burnett, Us Weekly reported. (If you've lost track, John David is the third-eldest child of Michelle and Jim Bob, and he's the twin brother of their eldest daughter, Jana.) “Abbie and I are just so excited, we’ve known of each other for several years,” John David said in a statement posted on the family's website. “We fell in love very quickly and it’s been a wonderful journey thus far." Abbie, 26, added, “John flew in for a church event here in Oklahoma where I’m from. We really got connected then.”

Fans of the Duggar Family are probably shouting a collective, "Finally!" for John David right about now. Because although 28 is a fairly average age to start a serious relationship these days, it's actually pretty "old" by the Duggars' standards. Through the years, we've watched many of John David's younger siblings enter into courtships, get married, and start families of their own — but the twins, John David and Jana, never did. Aside from John David's older brother, Josh, married younger siblings include: Jill, Jessa, Jinger, Joseph, and Joy-Anna. His younger brother, Josiah, is currently engaged as well, TLC reported. But this wasn't necessarily for lack of wanting it to happen.

During a 2016 TLC interview, John David revealed what his plans for the future were. "Future plans would be to, I think — one day, you know, the lord will bring the right one along — and then I'll start a family," he said. "And hopefully be able to invest in their lives and raise up a generation that will be great people for the society ... Just a good, solid family ..." When asked if he had found that special someone yet, John David replied, "I don't have anybody right now, but I am praying about it. One day, just keep watching."

Perhaps it's because John David has been creeping toward age 30 without any courtships under his belt — which is practically ancient in Duggar terms — that rumors of his courting had been rampant through the years. In the past, a woman named Tabitha Paine has been linked to the second-eldest Duggar son. However these reports were disproven by Paine herself. "I have been a live-in tutor to the Duggar children for the past year,” she wrote on her blog, according to the International Business Times. “Because we don’t do school 24/7 I am able to join in with the family’s work and fun activities during the weekends and evenings. Hence, the reason why you may see so many pictures!" Thankfully, it seems the days of courtship rumors are now behind John David — because now he's got the real deal.

If John David Duggar's courtship with Abbie Grace Burnett is anything like that of his siblings' before him, I have a feeling a quick engagement will ensue. And then — before we know it — yet another Duggar wedding will be in the works! Potential warp-speed timeline aside, one thing is for sure: Fans will have a lot to catch up on when Counting On returns to TLC later this summer.