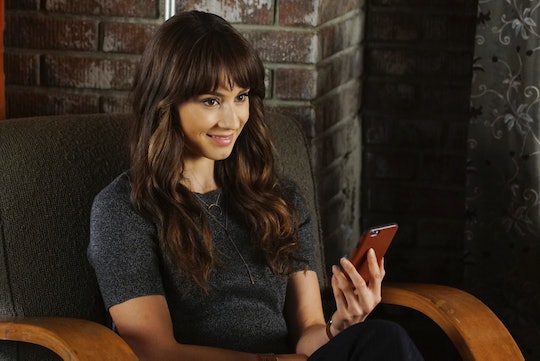 Who Is A.D. On 'Pretty Little Liars'? 5 Theories On The Mystery Texter's Identity

The Pretty Little Liars Season 6B finale was full of twists and reveals that I don't know if many saw coming. First of all, Jessica DiLaurentis has a twin named Mary Drake who is Charlotte's birth mother. Also, Elliot Rollins is working with Mary Drake, Alison is now committed to a psychiatric hospital, Hanna is missing (possibly dead in the church), and "A-moji" has started signing texts with "A.D." So, who is A.D. on Pretty Little Liars? Well, fans of the series have started speculating who is the face behind these mysterious texts.

The Liars have been receiving threatening texts for years now, at this point, they're old pros (who have hopefully upgraded to unlimited data since they get so many texts). But the "A.D." signature certainly seems more identifiable than past signatures their tormentors have used. Before getting too into the theories that fans have presented, we can't be sure that A.D. stands for someone's initials. This would be a major clue for someone to give the Liars, and I don't think that "A-moji" is that giving and generous.

So, what could A.D. mean on Pretty Little Liars? Here are some of the most popular theories with fans.

This seems pretty obvious, but maybe that is the point. A.D. are Ali's initials (well, technically her initials are A.R. now), so maybe this isn't that complicated. Then again, Ali is currently committed and without any personal possessions. So, texting would be difficult. Stranger things have happened.

Perhaps there's another DiLaurentis roaming around town. There are so many of them, I wouldn't be surprised if more came out of the woodwork.

On the finale, we learned that Charlotte's mom is actually Mary Drake, Jessica DiLaurentis' twin sister. We still don't know who her dad is, but his last name could also be Drake.

Let's be honest, Bethany is probably not texting from the dead, but she could totally be connected to this somehow. Whether she has her own twin, or has someone working on her behalf.

We know Andrew was adopted, so maybe he is a Drake at heart and actually Mary's son? Perhaps Mary Drake is cultivating an army of Drakes to do her dirty work. We know that Andrew has an ax to grind with the Liars, so it wouldn't be that surprising to find out he's working against them.

So, who is it going to be? Realistically, it's probably not going to be any of these people because that's just how Pretty Little Liars works.