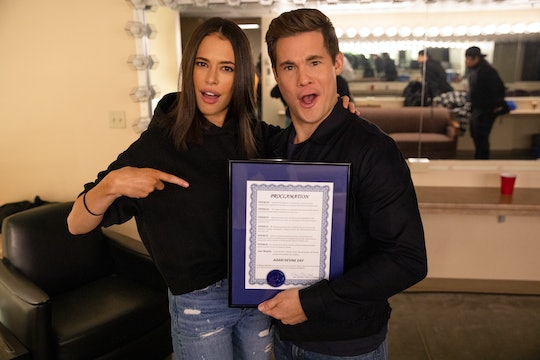 Adam Devine headed back to his hometown of Omaha, Nebraska to film his first ever standup special for Netflix, and among the topics broached by the Pitch Perfect star is the existence of his longtime girlfriend. In a sneak peek of the special released before its debut, Devine jokes that he's finally acknowledging the relationship publicly after four years together, so viewers may be wondering who Adam Devine's girlfriend is. It turns out she's a well-known actress in her own right and the two met filming horror movie The Final Girls. Perhaps best known for playing Sydney on Pretty Little Liars, Chloe Bridges and Devine began quietly dating in 2015, according to Us Weekly.

Devine was previously romantically linked to his Pitch Perfect costar Kelley Jakle, but starting in 2014, Devine and Bridges began posting photos together on Instagram. In November, they attended the Pretty Little Liars wrap party together, and then in January of 2015, they posted photos together at Disneyland and later at a Sam Smith concert. This past February, Devine even dished on their Valentine's Day plans in an interview with Entertainment Tonight: Canada, saying, "I think my girlfriend’s gonna come up and we’re gonna try go to dinner somewhere. I’m gonna be really cute. Cuteness level 10, I think."

In 2017, the Workaholics alum planned a long, romantic European getaway with Bridges and the poor guy didn't even realize he was staging what looked very much like a proposal vacation. According to the Daily Mail, Devine told Australian radio station Hit 105:

I think we had been dating long enough that maybe she thought I was going to propose...I didn't realize I [was] taking her to the most romantic places in the world. I'm taking her to Venice, Paris, and we had honeymoon suites because they're the nicest rooms. So I think she was having some grandiose ideas, meanwhile I'm too dumb to pick up on any clues.

Classic. But since the pair are still an item, it sounds like Bridges got over any disappointment she may have been feeling.

Since her time on Pretty Little Liars, Bridges has had a multi-episode arc on MTV's Faking It and starred in VH1's Daytime Divas, based on Star Jones' book, as Kibby Ainsley. She's also appeared in multiple episodes of Netflix's Insatiable and The CW's Charmed reboot.

As for Devine, he's been very forthcoming in the past about how it took several tries before convincing Bridges to go on a date with him. In an interview with Life & Style, he admitted to asking her out every single day for months before she said yes. But it was all worth it. "When you find the love of your life, you ask her every day for months," he explained.

His next big project, set to premiere in August of this year, is an HBO comedy series about a televangelist family called The Righteous Gemstones. In the meantime, you can catch his first foray into standup, The Best Time Of Our Lives, now streaming on Netflix.