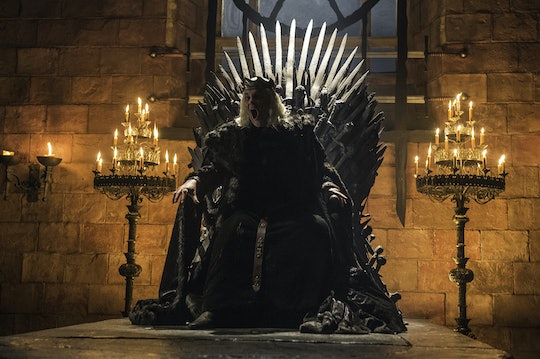 The Name Aegon Targaryen Has A Rich 'Game Of Thrones' History

The events of Game of Thrones were set into motion long before the series began. It was the actions of past rulers that led to the mess all of the characters are now trying to untangle. The Targaryens ruled Westeros for hundreds of years and there have been numerous ones who could have an impact on things now — including a book character who hasn't made an appearance on the show despite his potential importance to the plot. And, coincidentally, these characters share the same name: Aegon. But who is Aegon Targaryen in the Game of Thrones books?

As often happens in dynasties, the same names are repeated over and over throughout the Targaryen family. Many of the men named Aegon ended up being very important figures in Westerosi history. The very first Targaryen to take over was Aegon the Conqueror, the lord of Dragonstone who rode his dragon Balerion into battle and seized the Seven Kingdoms for himself — a destiny Daenerys seems to be emulating now.

After him followed many more men of the same name: Aegons II through V, all of whom were kings of varying success. Aegon is a name that almost seems to guarantee a stint on the throne for the Targ in question, though there are a few key instances where that hasn't been true.

But it does seem like Aegons almost aways ascend to kingship, even if their rule is marred by conflict. Aegon II's sister Rhaenyra tried to oust him from the throne, and he was so greatly disliked that his own courtiers poisoned him. Rhaenyra's son Aegon III was next in line after marrying Aegon II's daughter; his rule was uneventful, but it was born out of intense unrest.

Aegon IV was also known as Aegon the Unworthy. He also created quite a lot of friction by legitimizing his bastards and and setting off yet another war for the crown. Aegon Blackfyre was the child of IV's bastard son Daemon (he didn't rule, but he bears mentioning as another Aegon). Finally, Aegon V was the grandfather of the Mad King Aerys. If your name is Aegon, it seems like a weighty destiny awaits you.

That suspicion of an important destiny may have inspired Rhaegar Targaryen, eldest son of the Mad King and brother of Daenerys Targaryen, to name his own eldest son Aegon. Rhaegar was alleged to believe his son Aegon could be the prophesied Prince That Was Promised, but those hopes were dashed when the infant Aegon was killed in the Sack of King's Landing during Robert's Rebellion. However, in George R. R. Martin's books there is some indication that Aegon might actually still be alive.

On the show, it looks like Aegon is definitely deceased, but in the books a young man called Young Griff purports to be the real Aegon. The story was that Varys switched out the real prince with a proxy, causing another child to be killed but allowing Aegon to survive. He was then smuggled out of Westeros and grew up across the Narrow Sea, raised by Rhaegar's close friend Lord Jon Connington. There's a possibility Young Griff could really be Aegon, though none of this has ever come to pass onscreen.

There are also theories that Jon Snow's real name might be Aegon now that his Targaryen ancestry has been revealed. It remains unconfirmed for now, but it's clear that Jon is not his birth name; it was the name given to him by Ned Stark to protect him, so that no one would discover his real identity. While it might have been in bad taste for Rhaegar to name his two sons the same thing, it's not unheard of. George Foreman named all his kids George! Alexander Hamilton's youngest son was named Philip after his deceased older brother Philip. It happens.

It seems like Aegon is a name fit for a king on Game of Thrones, so whoever ends up saddled with it has quite the future ahead of him.