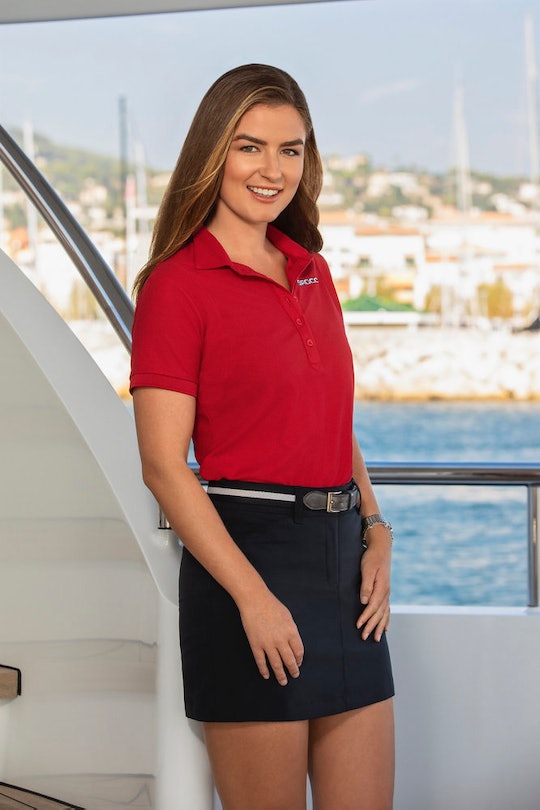 Aesha Scott Is Bringing Her Boisterous Energy To ‘Below Deck Mediterranean’

Below Deck Mediterranean is back with a brand new season, and along with seeing favorites like Captain Sandy Yawn, Chief Stew Hannah Ferrier, João Franco, and Colin Macy-O'Toole return, fans will get to meet some fresh new faces. There’s one crew member in particular, Aesha Scott, who’s been intriguing fans, and they’d like to know as much as they can about her. So who is Aesha on Below Deck Mediterranean?

According to Bravo, Aesha is Second Stew this season, and she’s coming in with four years of yachting experience. Her bio states that she grew up in a small town in New Zealand with four brothers, and it describes her as “loud and gregarious” person who has “a bawdy sense of humor and always down to have fun.” Her bio also reveals that she never set out to become a yachtie, but her adventurous lifestyle eventually drew her to the sea.

“Aesha began working as a deckhand before moving over to the interior,” Bravo’s bio reads. “Though she loves both roles, she prefers working with guests and prides herself on always doing an impeccable job. Whether she’s partying with her friends and fellow crew, diving, exploring various destinations, or flirting with the nearest deckhand, Aesha’s end goal is always the same: to have a blast.”

If Aesha is as fun and boisterous as her bio makes her out to be, then you can count on her bringing some major excitement to this season of Below Deck Mediterranean. On her Instagram page, Aesha shared her excitement for the new season with a photo from the show, featuring two of her crewmates, Hannah Ferrier and Nastia Surmava. “Filming this show was easily the most fun thing I’ve ever done,” she wrote in the caption. “SO excited for that first episode to air and laugh as everyone rips the sh** out of me. I’d say these two probably managed everything a bit more gracefully than I did.”

As you would expect from an adventurous yachtie, Aesha’s Instagram page is filled with wanderlust. She’s posted pictures from her various trips to exotic locations like the Chichen-Itza Ruins, Monaco, Ibiza, Nice, and Antigua, just to name a few. In one photo, she’s sitting on the edge of a boat in Plage Le Colombier, France, and in the caption, she mentions how much she appreciates her career and her life. “It’s days like these where I can’t believe my luck in life,” she wrote. “A small town Kiwi girl sipping on the best Rosé in France right by the sea. I never imagined my life would be this good going through everything I did growing up, but if you stay positive and work hard good things will come to you.”

As the crew heads to the South of France on this season of Below Deck Mediterranean, it’ll be exciting to see what kind of fun and excitement someone like Aesha brings to show.

Below Deck Mediterranean premieres on Monday, Jun. 3 at 9 p.m. ET on Bravo.