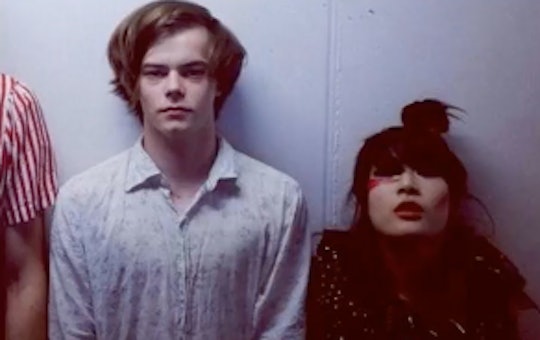 Here's What We Know About Akiko Matsuura, Charlie Heaton’s Ex-Girlfriend

One of the stars of the hit Netflix show Stranger Things, Charlie Heaton, is reportedly a father of one, much to the surprise of fans everywhere. The mother of the child is reportedly Akiko Matsuura, a musician and the "frontwoman" for the band they were both in, Comanechi, according to NME. Thanks to the news that Heaton has a 3-year-old son with Matsuura, people are now especially curious about the former couple. Who is Akiko Matsuura, actor Charlie Heaton's ex-girlfriend, anyway?

The "cult group" Comanechi was reportedly known for Matsuura’s "fast and furious approach," according to NME. Heaton apparently left his rocker life behind for acting in 2015, but it sounds like Matsuura is still part of the music scene in the United Kingdom. She is a member of noise rock band Pre, and has performed drums for The Big Pink, according to The Daily Mirror.

Matsuura reportedly gave birth to their son, Archie, in 2014, The Daily Mirror reported. And it appears that Matsuura and Heaton were both pretty young when he was born, considering both are 23 now, according to The Daily Mirror. A source reportedly told The Sun:

But Matsuura and Heaton are no longer together, and they live in completely separate places. The source also told The Sun:

They’re no longer together but they have an amicable relationship for the boy’s sake.

It's really great that Matsuura and Heaton reportedly keep things civil, especially since they have a son together. Co-parenting can be a positive experience, as long as the sole focus is on the kid(s) involved, according to Psychology Today.

But besides the fact that she's a mom working on shared parenting with her ex, what else do we know about Matsuura? She's not an actress like Heaton, so the information available about her is a little more limited.

Archie and Matsuura reportedly live in London, according to Teen Vogue. But Heaton mostly stays in Los Angeles, Us Weekly reported. A source told that outlet:

Charlie is in L.A. most of the time auditioning and was filming for Stranger Things, but he jumps across the pond to London to see their son. Akiko and Charlie are amicable coparents.

So it sounds like Matsuura mostly hangs out on her side of "the pond" and handles much of Archie's care herself.

Matsuura, who is from Japan, is also still a part of The Big Pink, so the U.K. music scene is what likely keeps her in London. Matsuura once spoke with The Quietus about her music, along with other members of Comanechi. In March of 2013, she told The Quietus:

...Writing the perfect single is my all-time ambition. It’s the ultimate expression of pop sensibility.

Whether Matsuura ever wrote the "perfect" single is debatable, but Comanechi actually has a website where you can learn more about the band and the music it produced. Plus, some of the band's songs are on YouTube, so you can decide for yourself whether Matsuura ever achieved her "all-time ambition."

The news that Heaton and Matsuura have a son together broke not long after Heaton was detained at Los Angeles International Airport for alleged cocaine possession on Saturday, according to PEOPLE. Traces of cocaine were allegedly found in his luggage, according to NME. In a statement about the incident, Heaton told PEOPLE:

Heaton's representative did not immediately respond to Romper's request for additional comment.

And after the incident, Heaton was sent back to the U.K. It sounds like Heaton was traveling alone for the premiere, but it's possible he saw Matsuura and Archie while he was overseas.

Whatever comes of Heaton's situation, hopefully it doesn't impact any upcoming visits with his son, or affect Matsuura in any way. It sounds like she has a really cool music career going for her, and I for one will be paying attention to what she does with it in the future.