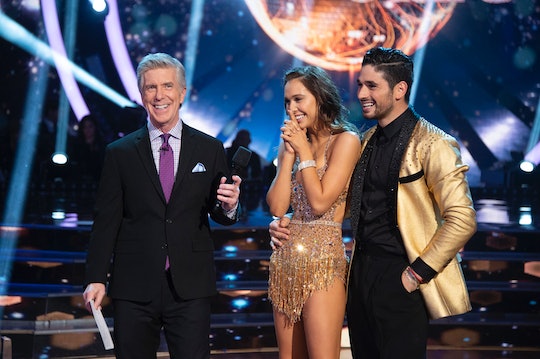 Alan Bersten was a troupe member on Dancing With the Stars before he was promoted to pro last season. But even before he joined the ranks of the other professional dancers, viewers had questions about him. Like, for example, who is Alan Bersten dating? The DWTS pro keeps his personal life private for the most part and right now it would seem that he’s single. There aren't any mysterious posts on social media to give away any significant other in Bersten’s life, so it’s safe to say that he’s single, or at least that he would prefer fans to believe that he’s single.

More Like This
These 35 Photos Of Prince William & Kate Middleton Are As Close To Royal PDA As It Gets
Everything There Is To Know About The Friends Reunion
The Great-Granddaughter Of Alice In Wonderland Is Getting Her Own Show
Peppa Pig Is Going Camping In A New Live Show & You’re Invited!

That doesn't mean that there hasn't been speculation, however. During Season 22, contestant and UFC fighter Paige VanZant was rumored to be dating Bersten at the time. Fans speculated about their romance throughout the season and while they both denied the rumor on-screen, VanZant told Entertainment Tonight, "A girl does not kiss and tell." ET also reported at the time that at the DWTS after party, Bersten and VanZant were seen getting close throughout the night. But neither of them confirmed the dating rumors during or after Season 22 and that’s the last time there were any solid DWTS dating rumors involving Bersten.

Bersten may not even have the time for dating. DWTS keeps him plenty busy now that he's one of the pros and no longer part of the troupe. And more often than not, he’s a featured dancer during the live tours the cast puts on throughout the year. Dancing is his biggest focus right now, especially since his career had really started to take off. In April, he underwent surgery to have a tumor removed from his neck and although it was a major surgery, his main focus was recovering so he could get back to dancing. "I wanted recovery as fast as possible, so I could be back here for this season — I didn't want to miss a season," he told Entertainment Tonight. "Honestly, dancing is my passion and that's what really makes me happy at the end of the day. So, I just wanted to be back as soon as possible, dancing."

Bersten was part of the DWTS troupe for five seasons before he spent four weeks as Heather Morris’s partner during Season 24. After that, he was brought on as a pro dancer and he’s toured with Dancing with the Stars: Live! five times, so clearly he focuses a ton on dancing.

Although it would seem that Bersten is single, it isn't uncommon for pros and even contestants on DWTS to find love while on the show. Maks Chmerkovskiy and Peta Murgatroyd, two of the show's regular pros, met on the show, fell in love, had a baby, and got married, all thanks to DWTS. And Val Chmerkovskiy briefly dated Amber Rose, who’d been his brother Maks' partner during Season 23. Emma Slater and Sasha Farber also fell in love on DWTS and even got engaged during a live episode in 2016. Back in Season 6, Shannon Elizabeth also dated her pro partner at the time, Derek Hough, so it would be no big surprise if Bersten fell for one of his fellow pros or a future star he get paired with.

Since these pro dancers live and breathe their work on the show and off, it’s not out of the realm of possibility for Bersten to find love through DWTS somewhere down the line. But right now, he seems to be single and focusing on work.