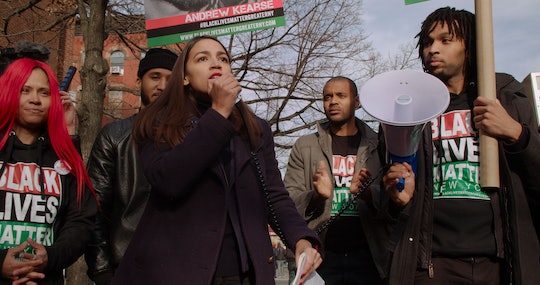 After Alexandria Ocasio-Cortez unseated Democrat Joe Crowley in the 2018 midterm elections, she became one of the most talked-about personalities in politics today, both for her magnetic personality and her progressive platform which calls for Medicare for All, the abolishment of ICE, tuition-free public college, and a raised minimum wage. And while she's definitely taking the world over on her own people still want to know who Alexandria Ocasio-Cortez's boyfriend is because he's been in her corner since day one.

Still, the mystery surrounding a man who stands (almost) entirely silent by the outspoken representative's side is appealing.

In an October profile on Ocasio-Cortez in Vogue, Roberts is referred to as an easygoing redhead who moved from Arizona to be with her. Ocasio-Cortez said they met in "true nerdy fashion" at a BU-hosted event.

And though there are hardly any mentions of Roberts from Ocasio-Cortez, there is definitive proof he exists in Ocasio-Cortez's Instagram announcement she'd be running for Congress. There's no denying he's right there in the third picture (you have to swipe through), alongside the whole fam including Ocasio-Cortez's brother Gabriel and mom Blanca.

As far as what else Roberts is up to (aside from being the greatest, most supportive boyfriend ever), he previously had a LinkedIn profile that's since been deleted, but according to Heavy, which reported before it disappeared, Roberts listed his profession as a UX Growth Consultant. Meanwhile, Marie Claire reported Roberts' LinkedIn profile named him "head of marketing at HomeBinder.com, which helps people manage the maintenance on their homes." Along with that, he worked as "a consultant to help tech startups grow revenue using marketing and development." However, since the account in question seems to have disappeared I can't really confirm either way.

Roberts doesn't appear to be on social media — but Ocasio-Cortez has taken to Twitter to call-out some bad behavior. So, you know, that's close.

It seems as though having a relationship with a powerful woman in politics means having to omit some parts of your history, but it doesn't appear to bother Roberts. If anything, he's probably thrilled that Ocasio-Cortez's mom already gave her seal of approval when she spoke to Daily Mail about their relationship. "I love him," she said. "He is the most loving, supporting person I've seen. He helped her tremendously during the election.

Now that you know a little more about Ocasio-Cortez's boyfriend, you can breathe easy. It may not rank in the top three things to obsess over today, but if she's to ever run for President (wink), you'll be fully educated on her politics — and her personal life.