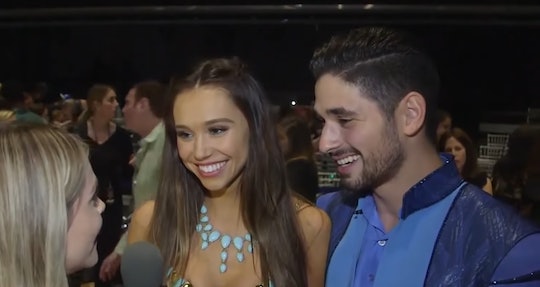 Dancing with the Stars may be all about dance ability — but it's undeniable that strong chemistry between two partners can also help them go far. Model and social influencer Alexis Ren has been in a relationship for a while, but her fierce chemistry with partner Alan Bersten has fans wondering: who is Alexis Ren's boyfriend?

During a recent episode of Dancing with the Stars, an off-camera producer asked Alexis, 21, if she has developed "any feelings" for Alan, 24. “No comment," Alexis replied with a laugh, according to The Brantford Expositor. Very curious.

And after the show, ET's Katie Krause got a minute with the couple, where she asked Alexis and Alan if there was anything between them off-camera. "I mean, we're just, we're just so happy to be here and like I love him so much and I love his energy so much and we've been so focused on the competition," Alexis told Krause, according to ET Online.

"I feel like the experience is once in a lifetime and we're just making the most of it and really just going out there and having fun," Bersten added. So that's a maybe? Regardless, they're clearly not saying much with regards to their personal lives.

The rumors are not only based on the pair's chemistry, but also on reports that Alexis and her boyfriend recently broke up. Last weekend, The Blast reported that Alexis and her boyfriend, a photographer known as Sky Bear on Instagram, had called it quits. Alexis, who had been living with Sky in Hawaii, is also reportedly making the permanent move to Los Angeles, according to The Blast.

The breakup with Sky is still pretty fresh — Alexis' most recent appearance on Sky's Instagram was on Oct. 1. "Two of my favorite things in this world..." Sky captioned a photo of the couple frolicking in the ocean. And Sky's most recent shot on Alexis' Instagram was posted a bit further back, in July, and it featured the couple in their undies posing in front of a mirror together.

Also, it should be noted that Alexis herself hasn't said anything about the breakup — or if it's even true. It's entirely possible that her relationship is perfectly healthy and people are speculating without cause. And it's also possible people just want to see her and Alan together because, I mean, look at how cute they are together.

Even if the rumors are true about Alexis' newly single status, that doesn't mean she's already dating Alan. It is still pretty fresh and they do have the competition to focus on, after all. And they have been one of the most-improved duos of the season. Their first week left them with a score of 21, but most recent dance (during Disney Night) garnered a score of 29. Not too shabby!

Whether or not Alexis and Alan really do have a little somethin' somethin' between them, it's totally up to them when that information becomes public knowledge. And in the meantime, feel free to keep watching them kick butt on Dancing with the Stars.