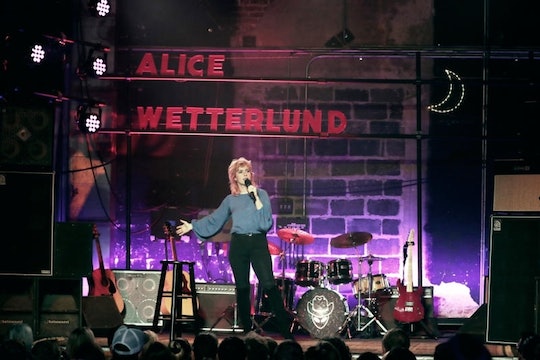 Amazon Prime is new to the world of live stand-up comedy specials, but it's coming in hot on Netflix's heels this summer with some debuts. If you've heard this buzz you might be wondering who Alice Wetterlud is. Her special, My Mama Is Human And So Am I, is one of the first of its kind to hit the streaming platform. I don't know about you, but I trust jokes more when I know something about the person telling them, so I went in search of clues about Wetterlund beyond the fact that she's human. Do you blame me?

She's a "stand-up comedian, improvisor and actor" originally from Minneapolis, Minnesota, according to the bio on her official website. She currently lives in LA, and if Californians want to see her perform live they should go to Largo in Los Angeles, Hollywood Improv, or Punch Line in San Francisco where Wetterlund regularly performs. She's had guest spots on popular comedies like Single Parents on ABC and Netflix's GLOW. But you may know her best as Kelly Grady on the TBS comedy about a support group for people abducted by aliens, People Of The Earth.

Wetterlund can also be seen in the film Mike And Dave Need Wedding Dates or on HBO's Silicon Valley. Her filmography is impressive but one of my favorite facts that I found on her website is that she has "feline sons" named Biscuit and Birdie. I get along with cat people. Plus, male cats are so much more chill than female cats (I can say that because I have a female cat) — so I'm guessing their mom is easy-going, too.

Wetterlund is the type of comedian I love to watch, because her passion for her craft is so deep, you can even hear it in her voice when she's doing interviews. "I love stand-up. It's my favorite thing in the world to do and to watch," she told CBS' local affiliate WCCO Minnesota. "So, writing new material feels really good to me. There's no feeling in the world [like] getting a new joke and getting it to work. [It's] the greatest feeling, it's like your brain gets tickled. It's my ASMR."

Make no mistake, Wetterlund's road to success hasn't been an easy one. She's been divorced and struggled with alcoholism, and in her special she opens up about her journey and the downside of dating musicians in LA. She also talks about feminism, politics, and, of course, life as a cat mom.

Wetterlund hasn't gotten where she is today by being quiet. She was in the news last year for calling Silicon Valley co-star TJ Miller a "bully and a petulant brat" in a tweet, and calling out other co-workers for allowing the behavior.

But she didn't let that experience or any backlash from the tweet slow her down. "There is no majority of audiences that are ready to hear all the jokes a woman has to say," she told CBS. But she doesn't seem like she's going to stop until she gets to speak her whole entire mind. I don't know about you, but I'm ready to listen.

You can stream My Mama Is A Human And So Am I now on Amazon Prime.