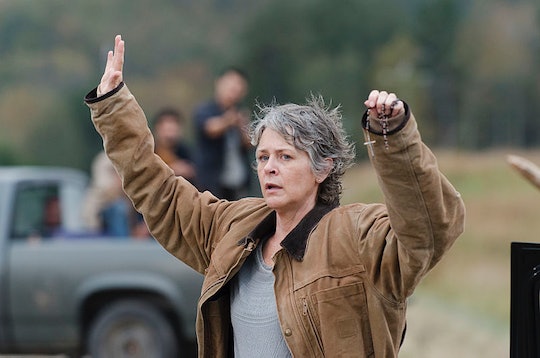 Who Is Alive In 'The Walking Dead' Comics? There Are Some Major Changes

The comics that The Walking Dead is based on are something of a double-edged sword when it comes to spoilers: they have all the future information a fan hungry for more could want, but they're also not a guarantee. Major events and threats do eventually make their way from page to screen, but the show is famous for scrambling things up to keep viewers guessing. For example, some characters who die in the comics are still alive on the show, and vice-versa. Some characters are given death scenes that belonged to someone else originally, while others escape a tragic fate just by luck of the draw. So who is alive in The Walking Dead comics?

The fact that the death toll differs from the comics to the series goes to show that just because someone is alive in one form, doesn't automatically make them safe in another. Changing things up allows the show to keep the audience on the edge of their seat and prevents the ruin of every single surprise. However, Glenn's death proves that the most iconic death scenes could still remain the same and posing a looming threat to these characters. Still, Glenn is one of a few people to die in the exact same way and at the exact same time as their comic counterpart. Everyone else is dealing with a grab bag of death.

(Warning: comic spoilers abound. Proceed at your own risk.) Thankfully, many of the show's major characters are still alive in the comics: Rick, Carl, Michonne, Maggie, and Maggie's son are all fine (though Rick is down one hand). Eugene is still alive, as are Tara, Aaron, and Heath; Hilltop favorite Jesus is still around, as is Savior Dwight, who eventually turns on Negan, therein taking over the Sanctuary himself. Negan, unfortunately, is also still alive. Then there are the more major changes: baby Judith died with Lori in the comics and Carol killed herself, but neither Sophia nor Andrea were ever zombiefied. They both made it, with Sophia going on to be raised by Maggie and Glenn (until his demise) and Andrea getting together with Rick. Daryl, who doesn't exist in the comics, is neither here nor there, so his fate could go any number of ways, which is terrifying.

Then there are other characters who died in both mediums, but in different ways. Dr. Denise's arrow through the eye was actually Abraham's death in the comics, and you could argue that TV Abraham got Glenn's comic death (even though Glenn got it too). Lori died in the comics as well, but not during childbirth. Instead she was shot while escaping the prison, which is when her falling body crushed baby Judith to death. Hershel was killed by the Governor in both, but his decapitation in the show was actually Tyreese's comic demise. In the comics, Hershel simply got shot and killed. Tyreese also died on the show, but it was due to a zombie infection rather than having his head lopped off. Meanwhile, Bob stole Dale's cannibalism storyline, though both characters ended up dead, regardless.

Many of the changes made by the show were for the better, in my opinion. Who could imagine The Walking Dead without Carol around? Alterations are necessary for adaptations to work, because there are a lot more variables involved in the production of a TV show. Some even felt the show should have deviated more from its source material, though diehard fans of both are always satisfied to see events from the comics come to life... and then die shortly thereafter.