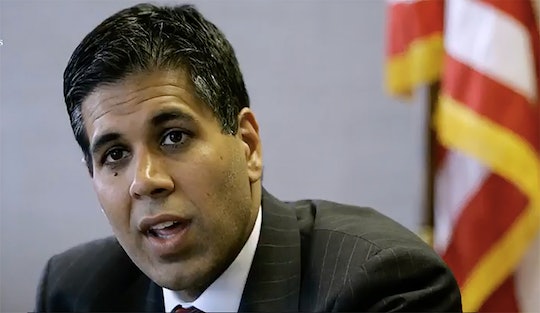 Here's What You Need To Know About Amul Thapar, One Of Trump's Rumored SCOTUS Nominees

After more than 30 years of service, U.S. Supreme Court Justice Anthony Kennedy drafted a letter to President Donald Trump on Wednesday announcing his retirement. Kennedy — who will step down on July 31 — is considered a "swing justice," which means his retirement is a big deal. And it's likely Trump will pick a staunch and young conservative judge as Kennedy's replacement, a prospect that's frightening to many Americans. Although Trump has yet to announce his choice for the job, The Courier-Journal reported that one of the frontrunners is Amul Thapar, United States Circuit Judge for the 6th U.S. Circuit Court of Appeals. Following the rumor, many people took to Twitter to express curiosity about Thapar's background and credentials. So, who is Amul Thapar? It's obvious why Thapar might be a top pick for Trump and conservatives.

Shortly after Kennedy announced his retirement, Trump told reporters he'd find a replacement as "quickly as possible," according to Real Clear Politics. Senate Majority Leader Mitch McConnell, who blocked President Barack Obama's own Supreme Court nomination following the February 2016 death of Antonin Scalia, echoed Trump's sentiment. "The Senate stands ready to fulfill its constitutional role by offering advice and consent on President Trump's nominee to fill this vacancy," McConnell said during a speech on Wednesday, according to The New York Times. "We will vote to confirm Justice Kennedy's successor this fall."

Yep, it's pretty clear McConnell and Trump intend to confirm the Supreme Court pick before midterm elections in November. And it's not difficult to understand why they're so hasty — the Senate could look very different come November if Democrats do well in the midterms.

On that note, it's not surprising Trump might already be eyeing Thapar as Kennedy's replacement. In fact, it looks like the vetting process for Thapar has already begun. Zoe Tillman, a reporter covering courts and justice for BuzzFeed news, reported on Thursday that the "FBI has been doing background check interviews," on Thapar.

As for Thapar's credentials, it's obvious why Trump is eyeing him for Kennedy's spot. For starters, Thapar is only 49 years old, and his age satisifies Trump's desire to pick someone young.

Secondly, Thapar is well-liked by McConnell. Not only do the two both have strong ties to Kentucky, but Thapar received high praise from McConnell following his confirmation to the 6th U.S. Circuit Court of Appeals in May 2017. McConnell said in a statement, according to The Courier-Journal:

Judge Thapar has a distinguished record of public service. He is a well-qualified jurist, and a man of integrity, who will bring a top legal mind to serve on the 6th Circuit. I look forward to the full Senate confirming this well-respected Kentuckian.

It's also possible Trump is considering Thapar because he was the first person of South Asian descent to become a federal district judge, according to the Lexington Herald-Leader. Choosing Thapar — the son of Indian-American immigrants — would give Trump a bit of a boost in the diversity department.

Lastly, Thapar is a longtime conservative who has relationships with many high-profile Republicans, according to Politico. And making Thapar even more desirable is his educational background (University of California, Berkeley, Boston College), and his firm rulings. Thapar, for instance, once sentenced an 84-year-old woman to 35 months in jail for "breaking into a nuclear weapons complex and defacing a bunker holding bomb-grade uranium" in a protest demonstration, according to NPR. Although the protest caused no real harm, Thapar felt it necessary to hand down a serious sentence in this case.

Although Thapar isn't as vocal as other potential picks on Roe v. Wade, he has made his feelings known about other important issues. Not only does Thapar believe minor drug offenses should receive harsh minimum sentences, but he also has a controversial sexual harassment ruling on his resumé. Apparently, Thapar "rejected a same-sex sexual harassment and retaliation claim because he believed the worker didn’t show he was harassed because of his gender, despite his harasser groping him and making repeated sexual comments that referenced his gender," according to The Alliance for Justice.

Additionally, Thapar upheld "Ohio's method of lethal injection," and he reportedly continues a "practice of opening government meetings with Christian prayers," according to USA TODAY.

When you look at Thapar's past decisions, it's easy to imagine his view on a case like Roe v. Wade or LGTBQ rights, for example. It's safe to say Thapar is a very conservative pick.

Overall, it makes sense why Thapar might be Trump's top pick for Kennedy's replacement. And if Trump does choose Thapar, keep in mind there's always the possibility it won't work out. Midterm elections are just around the corner, and Democrats are working on a plan to ensure the confirmation process doesn't happen until after the elections are over. In this topsy-turvy political climate, you never know what could happen.