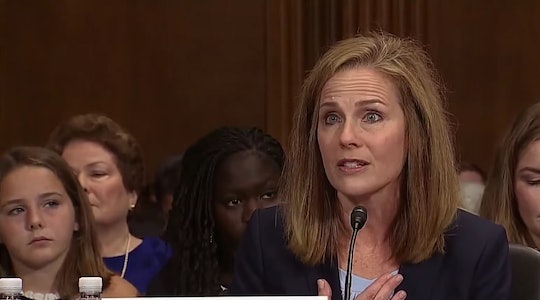 Trump Has Chosen Amy Coney Barrett As His SCOTUS Nominee

Members of a "charismatic Christian" group known asPeople of Praise have identified Barrett and her husband Jesse Barrett as members, according to a report from Reuters. Founded in South Bend, Indiana, in 1971, the group reportedly used to use the term "handmaid" to describe the female personal adviser assigned to female members and "head" for the male personal adviser assigned to male members, leading many to link the group to Maragaret Atwood's dystopian 1985 novel The Handmaid's Tale.

In 1986, Atwood told The New York Times Book Review she'd taken some inspiration for the book from a religious group that could have been People of Praise. "There is a sect now, a Catholic charismatic spinoff sect, which calls the women handmaids," Atwood told The Times. "They don't go in for polygamy of this kind but they do threaten the handmaids according to the biblical verse I use in the book — sit down and shut up."

According to Reuters, men in People of Praise are able to receive and seek spiritual and personal advice from other male members but married women must depend on their husbands to advise them. Moreover, former members have alleged the group revolves heavily around authoritarianism and sexism. “The bottom line is the People of Praise community is about conformity and obedience of women,” Politico reported former Oregon-based People of Praise member Coral Theill said of the group. A spokesperson for the group, however, denied those claims in a statement to Politico, saying the group recognized “that men and women share a fundamental equality as bearers of God’s image.”

But it remains unclear if People of Praise really was among the religious groups that helped inspire Atwood’s novel. The author told Politico she couldn’t be certain as the notes she kept while writing The Handmaid’s Tale are currently inaccessible due to COVID-19 closures. “Unless I can go back into the clippings file, I hesitate to say anything specific,” Atwood told the news outlet.

Additionally, Good Morning America has reported that a spokesperson for People of Praise has denied that the group inspired The Handmaid’s Tale in any way.

While deliberating over potential nominees to fill Supreme Court Justice Anthony Kennedy's vacant seat in 2018, Trump was reportedly quoted as telling a number of people he wassaving Barrett for when Ginsburg's seat on the bench became vacant. According to the Associated Press, Barrett first stepped into the role of a judge in 2017 whenTrump nominated her to the 7th U.S. Circuit Court of Appeals. Prior to that her experience in law had mainly been as a professor at the University of Notre Dame.

Although Barrett's judicial record may not be long, the Associated Press has reported it displays a "clear and consistent conservative bent." She has been quoted in Notre Dame Magazine as saying that she believes "thatlife begins at conception," sparking concern among abortion rights advocates who fear she might vote in favor of overturning Roe v. Wade if seated on the court.

It's worth noting, however, that in a 2017 White House questionnaire Barrett was quoted by the Associated Press as having said, "If I am confirmed (to the 7th Circuit), my views on [abortion] or any other question will have no bearing on the discharge of my duties as a judge" when asked if she viewed abortion to be immoral. Additionally, The New York Times reported that during her 2017 confirmation hearings, Barrett said she would followSupreme Court precedent on abortion rights if appointed an appeals court judge.

Still, Democrats in Congress have already expressed concerns that Barrett's religious views may guide or influence her interpretation of the law. "The conclusion one draws is thatthe dogma lives loudly within you," Democratic Sen. Dianne Feinstein told Barrett during her 2017 confirmation hearings. It's unclear, however, if Democrats will be able to prevent the president from pushing through a Supreme Court nominee so close to the election.

Editor's Note: This article has been updated to include Margaret Atwood's most recent comments regarding People of Praise and the religious group's denial that it inspired The Handmaid's Tale.