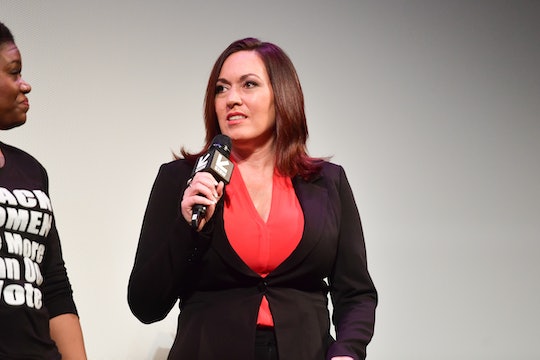 There are quite a few powerful women breaking glass ceilings and representing the voiceless in politics today and it is ~so~ refreshing. One of these leading ladies, Amy Vilela, is featured in the new Netflix documentary, Knock Down the House. If you aren't hardcore into politics, you might wonder who Amy Vilela is and what she stands for. Here's your quick start guide before you dig into the documentary.

A Democrat, Amy Vilela was a candidate for Nevada's 4th Congressional District in the U.S. House, but she lost the primary in June 2018. Knock Down the House chronicles Vilela through her bid against establishment Democrats in those midterm elections. As a single mother who survived on WIC, Medicaid, and food stamps (as she often speaks about), her platform stems from firsthand poverty experience and aims to change that from the inside of Washington.

As per her website, her story is one that, unfortunately, many Americans can relate to. Vilela got her start after her daughter Shalynne's death, "at the hands of our profit-driven healthcare system." The Las Vegas Sun covered the Nevada native's story in May of 2018, stating Vilela's 22-year-old daughter died due to "delays in care because of conflict over her insurance coverage." Shaylynne died as doctors attempted to "break up" a blood clot — one doctors missed throughout discussions over health care — that traveled from her knees into her body. The bottom line was that Vilela's daughter didn't get the emergency care she needed because of insurance delays.

"They’re telling her it’s going to be very expensive, she can leave now, there’s the door, it won’t cost her anything," Vilela said. "They want us to see if we can get her on our insurance."

She explained that in the wake of that devastating loss, she found her purpose; a "defining moment in my life," she said. Her goals are to challenge Washington representatives — or to replace them with bold, action-driven advocating on behalf of those in similar circumstances.

Before Vilela's daughter formed the clots, she first suffered from cardiac arrest and became comatose. Then, the clots came. "They were trying to bust the clot up, and she never regained consciousness," Vilela said. "I had to do what no parent should have to do, and that’s hold your child as they die a needless death." She confessed it took more than a year of grieving before she threw her hat into the politics ring to fight for all the other parents who lost children due to delayed insurance obstacles. She organized a rally "in support of the ACA while Republicans in Congress were trying to repeal the law," according to the same Las Vegas Sun article and garnered the support of Representative Dina Titus, D-Nev., who "signed onto the Medicaid for Public Option Act in Congress."

Director Rachel Lear's documentary highlights four of the most progressive women candidates as they ran for their campaigns in the 2019 midterm elections: Alexandria Ocasio-Cortez, Cori Bush, Amy Vilela, and Paula Jean Swearengin. Ocasio-Cortez is the only one of the four successful in landing that bid. Each of the women come from different parts of the country and carry different political views.

All of this to say, Knock Down the House is more than a documentary. Women are leading the charge and taking control of issues that have long-since been ignored or forgotten. Amy Vilela may not have won the midterms, but her commitment to healthcare reform and bringing awareness to those who slip through the cracks is winning America's heart.