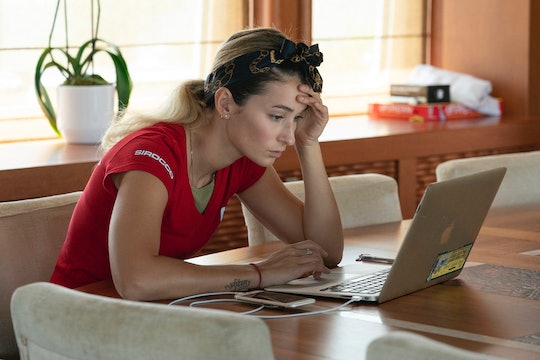 Meet Anastasia, The New Third Stew On Season 4 Of 'Below Deck Mediterranean'

Below Deck Mediterranean is returning for a fourth season, and this time, the crew of the 154-foot mega yacht the Sirocco will be traveling to the south of France. Joining returning cast members João Franco, Colin Macy-O’Toole, and Hannah Ferrier will be newcomer Anastasia Surmava, who joins the crew as a third stew. But fans tuning in may be wondering who Anastasia Surmava on Below Deck Mediterranean is. According to her Instagram, she's a super experienced traveler.

Anastasia, who goes by the nickname "Nastia" on social media, was born in the Republic of Georgia, according to her Bravo bio. She moved to the United States when she was two years old after her mother, who's a pastry chef, remarried. She discovered yachting upon meeting and dating a young captain, who introduced her to seafaring. Her Bravo bio also mentions a "strong work ethic and perfectionist approach" which obviously gets her into scuffles with some of her more, shall we say, laissez-faire crew members.

A little Instagram digging also reveals that she opened an eco cafe and yoga shala in Sri Lanka, where she appears to be living currently, called Ajna Food & Yoga. In a Mother's Day post, Anastasia revealed that her mom came for a six-week visit to lend her expertise and help her open up the cafe. She also mentions in her bio that she's repped by "a progressive Sri Lankan talent agency" called The Agency Sri Lanka.

"I have an immigrant work ethic," Anastasia explains in one clip from Season 4, adding, "It doesn't matter what I'm doing, I'm going to do it 110 percent. I got a B- once and I was like, 'My life is over!'" But that self-described "Type A personality" also leads her to unravel a bit when it comes to her more disorganized or mistake-prone shipmates.

"I've never experienced anxiety like this in my life," Anastasia can be heard saying in the Season 4 trailer of Below Deck Mediterranean, suggesting that she doesn't have the easiest time aboard. At one point, she follows the lead of fellow newbie Jack Stirrup, a deckhand, and leaves some guests hanging while they go and track down a jug of milk in town. Anastasia and Jack struggle to find a grocery store, which puts the guests in an awkwardly long holding pattern. Ship bosun João gets frustrated and chastises them for breaking what he calls "Rule 101: never leave the guests behind."

Other newbies this season include Aesha Scott, who joins as second stew, and Travis Michalzik who comes on as a deckhand. With captain Sandy Yawn at the helm, and the franchise's first ever female chef Mila Kolomeitseva in the kitchen, the crew of Below Deck Mediterranean Season 4 hope to last the vacation season. Of course, there are a few hookups in the mix, but more dramatically, the yacht starts taking on water at one point this season, according to the trailer, which leads to some tense-looking moments. Below Deck Mediterranean returns to Bravo on Jun. 3.