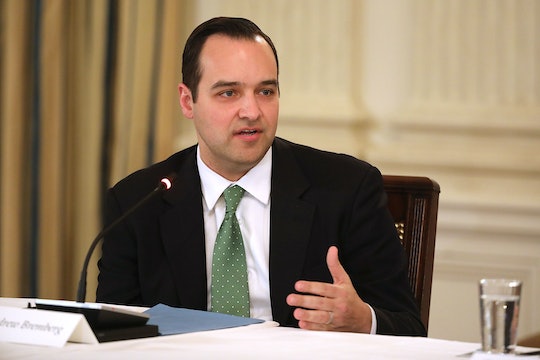 Trump has nominated his fair share of controversial picks throughout his presidency, and his choice for U.S. ambassador to the United Nations is no exception. Although Trump first announced his nomination in 2018, his pick is up for a Senate vote, and now some people might be wondering: Who is Andrew Bremberg? As it turns out, Bremberg has some interesting views about a woman's right to choose.

After Bremberg was nominated, he gave a controversial testimony during a confirmation hearing in June. He revealed that he's against abortion even in instances of rape, stating, "I don’t believe abortion is a moral solution to any problem."

He also supported Trump's proposed veto of the National Security Council Resolution 2467 which would provide victims of gender-based violence caused by war and conflict access to sexual and reproductive health care, according to The People for the American Way.

Unsurprisingly, it didn't take long for human rights groups to come out against Bremberg's appointment.

“Bremberg has made clear that he does not support reproductive rights even in instances of rape, when a pregnancy can be especially traumatic,” Amanda Klasing, acting women’s rights co-director at Human Rights Watch, said, according to the organization's website. “The senate should not send to the United Nations someone holding the dangerous view that women’s rights can be slashed away from fundamental human rights.”

The Kaiser Family Foundation, a non-profit group that focuses on national health issues as well as the U.S. role in global health policy, also released a statement asking the U.S. Senate Foreign Relations Committee to condemn Trump's nomination. It was signed by 38 other organizations, including the Planned Parenthood Federation of America, Human Rights Watch, and the National Institute for Reproductive Health.

An excerpt from the statement says:

A U.S. Ambassador to the United Nations in Geneva should be someone who will advance access to health care, including sexual and reproductive health services, promote all human rights, oppose discrimination against LGBTQI people, and support the rights of immigrant and refugee communities. Andrew Bremberg’s record and rhetoric clearly demonstrate he would not promote human rights, which is a fundamental requirement for this critical role.

It's important to note, however, that Bremberg's controversial stances and actions began long before his nomination. As a member of Trump's policy council, for instance, Bremberg was responsible for the expansion of and reinstitution of the global gag rule. The gag rule takes away federal funding from international organizations that perform abortions or give advice about the procedure as part of their range of services, according to Planned Parenthood.

He reportedly promoted several policies that would result in decreased access to health care services for people in the U.S., including defunding Planned Parenthood, overturning FDA approval for medication abortions, and promoting religious refusal policies that would allow health care providers to withhold information and services from the people they serve based on faith, according to Slate.

And it's not just about women's rights — it's about human rights as well. Bremberg supported the repeal of Obama Care, aka the Affordable Care Act (ACA), that gave people access to healthcare that they would otherwise not be able to afford, according to The New York Times.

All in all, there's a lot at stake here. It's still unclear when the Senate Foreign Relations Committee will make their final decision, but it's clear many are concerned about Trump's pick.

More Like This
Here’s How To Fight For Abortion Rights
Obamas Issue Powerful Statements After Supreme Court Ends Roe v. Wade
Can States Ban The Abortion Pill? FDA Rules May Make That Hard
This Map Illustrates Just How Many States Would Ban Abortion If Roe V. Wade Is Overturned