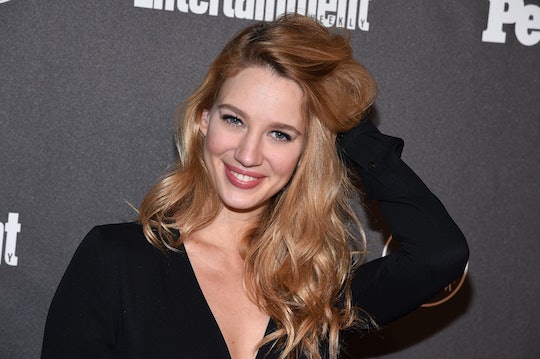 Who Is Anezka on 'Jane The Virgin'? She's Up To No Good

Though it's a show with a lot of heart (and more than a few heartbreaking moments), Jane the Virgin never forgets its telenovela roots. Take Petra, for instance; she started out a scheming villainess, but the show soon revealed her hidden depths and complex motivations. Then it dropped her into one of its most ridiculously soapy storylines yet: thanks to a previously undiscovered sample of Rafael's sperm, Petra inseminated herself and got pregnant. With twins. The craziness didn't end there for Petra, either – far from it. Her life was quickly complicated by the arrival of a figure from her past named Anezka. But who is Anezka on Jane the Virgin?

In true soap opera fashion, Anezka is the long lost identical twin sister that Petra never knew she had. Though they're both played by Yael Grobglas, Anezka and Petra couldn't be more different: where Petra is reserved and elegant, Anezka is awkward and silly to the point of parody. Anezka arrives claiming to want nothing except to connect with her family but she ends up taking advantage of Petra at a particularly vulnerable time in her life. Petra is adrift after the birth of her daughters and she needs family around her even though her family has never had her best interests at heart. Unfortunately Anezka's good intentions are just a facade: much like Petra in her earliest days, Anezka is concealing some pretty wicked behavior.

During Season 2, it quickly became apparent that Anezka was up to something. A show like Jane the Virgin doesn't introduce a mysterious identical twin unless they're about to do something majorly shady. Though Anezka claimed to have no contact with her and Petra's coldhearted mother Magda, it turned out they were actually working together. Once Anezka began to practice her Petra impression, the plan became crystal clear. And it wasn't long before she put it in motion.

The season ended with the two sisters in a horrifying switcheroo: Anezka had drugged Petra and then stolen her identity, leaving Petra in a vegetative state where she was aware of everything around her, but unable to do anything about it. It's a nightmare of a situation to be trapped in, and especially awful coming on the heels of Petra's journey towards becoming a better person in Season 2. Now that she's out of the way, Anezka is free to take over her life and she starts right away by making a move on Rafael.

Now Anezka is living in the lap of luxury with a guy she has the hots for, but she deceived everyone to get there and confined her sister to a terrifying fate. While it had been nice to see someone so totally on Team Petra for a change, it was obviously too good to be true, especially considering Petra's family history. As far as bad deeds go, Anezka has done some of the worst. It doesn't seem likely that this sisterly bond will recover any time soon.