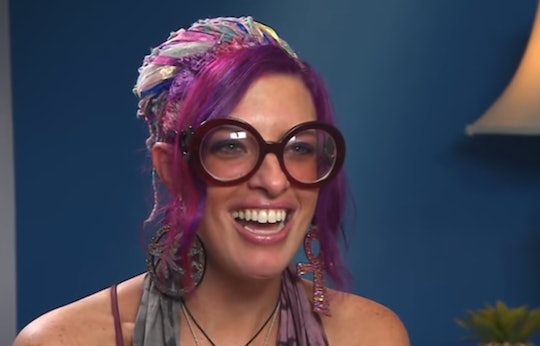 'Big Brother's 20th Season Has A Real 'Rockstar' In The House

Summer is here, and while some of your favorite fall shows have gone on hiatus, at least you’ll have some great reality TV to indulge in. Big Brother 20 premieres on June 27, which means you get to spend your summer watching a house full of strangers compete for a $500,000 prize while they try to live in complete isolation from the world. CBS recently announced the cast of 16 houseguests, including one colorful contestant that fans are anxious to see. So, who is Angie Lantry on Big Brother?

In her CBS cast bio, Angie “Rockstar” Lantry described herself as an “eclectic, entertaining, and magical” stay-at-home mom who enjoys “reading, writing, and dancing under the moonlight around a fire to fierce drum beats.” She also revealed some fun facts about her life, including the fact that a unicorn walked her down the aisle during her wedding, she has a 24-year-old turtle, and she used to work for a traveling petting zoo where she performed with the animals. When asked about what challenges she thinks she’ll face on the show, Angie noted that the lack of music is what will be the toughest part. “I never hear music on the show in the house and I live for music, to the point where I won't work at a place that does not play music,” she said.

In an interview with Entertainment Tonight, the Maryland native talked about how she got the nickname “Rockstar” from her mom, but then added to her children’s birth certificates, joking that they are “born rockstars.” When asked about how her three kids feel about her joining the show Angie said, "They love it. They’re like ‘I’m going to watch you, I’m going to watch you on the live feeds. If you get to be Team America, you need to talk to us in the diary room to tell us who you don’t like, but you need to pretend like you like them when you’re in there.’ - They’re strategizing, they’ve got it all laid out.”

So why would a stay-at-home mom want to leave her kids to join the show? In the interview, Angie explained that she's going on the show for her family:

Because I’m determined. I’m going to win because this has all just fallen into place as like a supposed-to-be kind of thing. I think everything has built up to this moment, that I didn’t even know I was supposed to be in, which is how the best moments tend to happen in general. And like, I’m doing it for my family. I really have a serious drive and goal to better not just myself, but my children and their life. And they mean so much to me, that there’s not a bit that I would give up to not be determined to win this for them.

Angie has a partner, Chris, who she mentioned in the interview as an introvert, who is fully supportive of her stint on the show. This is why she noted that she doesn't plan on being part of any “showmances” this season, adding “I would be in a lot of trouble if I got in a showmance,” because “I wouldn’t have a home to go home to.” When pressed on any secrets that may be revealed during the show, Angie said, “I’m literally an open book. My Facebook, up until now, has always been public." The mom continued, "I would write things down when I would go through things, and share experiences, and try and uplift people — and talk about things where I may have failed as a human, but by learning a lesson I didn’t really fail. So, everything I have ever done is out there in the stratosphere already.”

Angie comes across as a big personality, and that could either harm her or hurt her chances of winning. She may be endeared by some housemates, while others may find her to be a threat. How far she’ll get is still unknown, so you’ll have to wait and watch to see how her eclectic personality fares in the house. Big Brother 20 is set to premiere on Wednesday, June 27 at 8 p.m Eastern time. The series will air continue throughout the summer with new episodes airing on Sundays at 8 p.m Eastern time and Wednesdays and Thursdays at 9 p.m Eastern time.