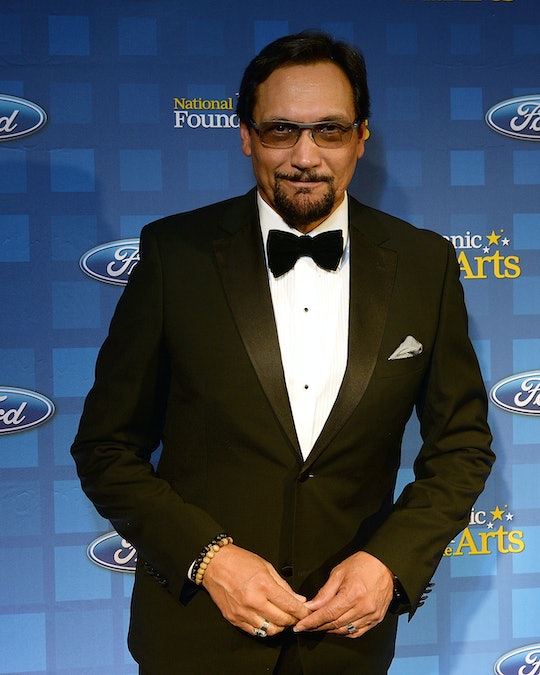 The Season 4 premiere of How to Get Away With Murder introduced a new character, and it seems he may play an important role in Annalise and Laurel's lives. So who is Annalise's therapist on HTGAWM? Played by Jimmy Smits, the character is a bit of mystery.

Thus far, the character's name hasn't even been revealed on the show, although according to IMDB his name is Isaac. Besides that, there's not much known about him or why he would be present when Frank went to the hospital and found Laurel waking up after being drugged and sans baby. Based on the very brief flash forward, it looks like Frank called Isaac to come to the hospital, which must mean they're close, or at the very least, Frank trusts Isaac. But why is that?

Frank and Annalise aren't even on speaking terms right now, so why would he know her therapist? Perhaps this means there's hope for a Frank and Annalise reconciliation in the future. While that would be nice, that still doesn't really explain why Isaac would go to the hospital and seem so concerned with what happened to Laurel. What would Isaac care if one of his patient's former students potentially had her baby stolen? Well, maybe it's because he's connected to Laurel in some way other than through Annalise.

Perhaps, just like how it was revealed that A.D.A. Denvers was actually working with Laurel's family friend, Dominic, maybe Isaac is somehow connected to Laurel's family. It kind of makes sense. Laurel's father, Jorge, claims he wants to be back in her life, but based on what I've seen, he really means he wants to be able to control her. He did kill her boyfriend after all, and he seemed much too pleased when she lied and said she got an abortion.

Maybe Jorge made sure one of his own people somehow became Annalise's therapist. If he thought Laurel was still working with Annalise, it could be a good way to get information about what his daughter has been doing for Annalise. Similarly, it's possible Jorge doesn't like Annalise and wants some kind of revenge on her. The show still hasn't really explained why Jorge had Wes killed; that could've been only step one in whatever he's planning.

Alternatively, it's possible Isaac is connected to Laurel's dad but he's on her side. By the way he looked at the hospital, it seemed liked Isaac was disappointed that Laurel was drugged, but that he almost expected it. Maybe Isaac is Laurel's uncle or another family friend, but one of the good guys. It's possible he knows Jorge killed Wes and maybe he's hoping to protect Laurel from whatever Jorge has planned next.

Even though Laurel lied and said she had an abortion, there's only so long she can keep up that charade. Whatever Jorge's reasonings were for killing Wes, it'd make sense that he wouldn't want Wes' child to be born either. Maybe Isaac knows that Jorge will try to take Laurel's baby, he tries to interfere and protect Laurel by working with Annalise and Frank, but in the end he fails. This would explain why he rushed to the hospital to see Laurel, why Frank was grateful Isaac was there, and why Isaac didn't seem totally surprised that something had been done to Laurel.

Or maybe it's something else entirely. How to Get Away With Murder continues to surprise viewers with each passing season, and no doubt this twist will also be mind boggling. All fans can really do now is keep watching to see how Isaac and Laurel's paths cross and what that means for her missing baby.