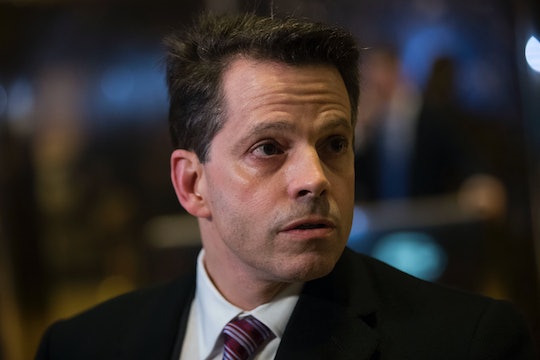 Who Is Anthony Scaramucci's Wife?

New White House Communications Director Anthony Scaramucci has had quite the week. In the days following Scaramucci's appointment, all eyes have been on him, watching his every move. To go from being a relatively private figure to someone constantly in the public eye can be intense — not only for Scaramucci, but for his family, too. After Page Six reported that Scaramucci's wife reportedly filed for divorce on Friday, some people will be wanting to know who Anthony Scaramucci's wife is in the wake of the news.

As previously stated, Page Six was the first to report the news early Friday evening, stating that Scaramucci's wife, Deidre Scaramucci (maiden name, Deidre Ball), had been the one to reportedly file for divorce. Sources told Page Six that Deidre was reportedly getting fed up with her husband's quest to get close to President Trump (who she is allegedly not a fan of) and reportedly "tired of [Anthony's] naked ambition, which is so enormous that it left her at her wits' end." The source also told Page Six that Deidre reportedly "hasn't exactly been on board and supportive of Anthony and his push to get back into the White House."

Anthony and Deidre did not respond to Romper's requests for comment.

But who, exactly is Deidre Scaramucci? She's a quite successful woman, who started dating Anthony in 2011 and married him in 2014, according to Page Six. Before meeting Anthony, according to Bustle, Deidre went to college at the University of Buffalo and graduated in 2001 before working as a vice president in investor relations for SkyBridge Capital, the investment firm which Anthony founded. But aside from her job, there is not much that people know about Deidre. Deidre is an incredibly private person, and according to Heavy.com, deleted her Twitter shortly after Anthony was announced to be the new communications director (which pratically makes her virtually untraceable).

Shortly after Page Six reported the news about the alleged divorce, Scaramucci took to Twitter to ask those to respect the privacy of his family, neither confirming or denying the news. "Leave civilians out of this," Scaramucci tweeted. "I can take the hits, but I would ask that you would put my family in your thoughts and prayers and nothing more." Anthony is father to a 21-year-old daughter, Amelia, and two sons, 18-year-old Anthony Jr., and 24-year-old Alexander, according to The Daily Mail.

Change is not easy and with Anthony suddenly pushed into the public eye in the past week, Deidre is probably going through a lot. In light of this reported separation, it is important to respect Anthony's wishes and leave Deidre and his children out of the spotlight.