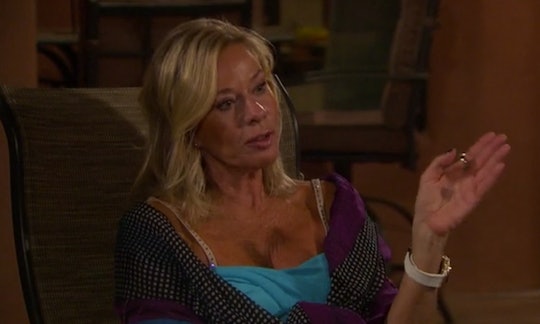 The Bachelor Season 22 has officially started, with around two dozen women all clamoring to win Arie Luyendyk Jr's heart. But they should know that in order to get the ring at the end, they'll first have to pass muster with Arie's mom on The Bachelor. She first showed up on screen when Arie was trying to win Emily Maynard's heart six years ago on The Bachelorette. She wasn't easy to impress then, and somehow I doubt that she's lightened up when it comes to her kids.

If you can remember that far back, you'll recall that Arie was the runner-up on Emily's season, which means that he got the opportunity to bring her on a hometown date and introduce her to his family. Before the introduction even took place, Arie warned Emily that his mother would be the hardest to impress out of all of them. And it turns out he was absolutely right. Arie's mother, Mieke Luyendyk, proved that she wasn't the easiest mom to please, and actually started questioning Arie in the family's native Dutch, leaving Emily (who does not speak Dutch) feeling very much on her own. Like a gentleman, Arie shifted the conversation back to English, but Emily ended up choosing Jef Holm over him in the end anyway.

Mieke apparently asked Arie how it was going, while Arie responded amicably that it was going great, doubling down when Mieke responded somewhat dubiously, "You think so?" Now that Arie is the lead of the show, when he's narrowed down his selections to just two women, he'll have to introduce them both to the somewhat intimidating woman. Though from the looks of her Twitter account (on which she's apparently fairly active), Mieke is not always so serious. In fact, sometimes she seems like she's downright fun. For example, in her first tweet she wrote, "Hi everyone I'm new to twitter! Be sure to follow me and I'll try and avoid tweeting while drinking my wine :)."

Though Arie admitted on Good Morning America that he hadn't told his parents he was the next Bachelor, it's still pretty obvious that he has a very tight knit family. Mieke has tweeted practically nothing but information promoting the show. Her Twitter account makes it equally clear that she enjoys an extremely loving and committed relationship with Arie's dad, Arie Luyendyk Sr. The two are always giving each other shout outs on the platform, posting pictures, and retweeting each other. They've also been together for decades, meaning Arie has a great role model couple to look up to.

Hilariously, Arie's dad tweeted a picture of himself and Mieke in a happy birthday message for his son, which Mieke then retweeted showing her support.

Arie's father is the Indy racing legend Arie Luyendyk Sr, who has won the Indy 500 not once, but twice. But clearly, he is not the most intimidating Luyendyk family member. However, perhaps Mieke's enthusiastic tweeting about the show is an indication of her approval of Arie's final choice. For her sake, I really hope this is true.

Viewers won't get to see how Mieke receives Arie's final two for a few weeks, however, when the final episode airs and both women have the opportunity (or challenge, depending on how you look at it) to meet Arie's family. They will then get a chance to tell him whether they approve of his choices or not. I have a feeling that getting approval from Mieke won't be easy for the women — and I can't wait to see what happens.