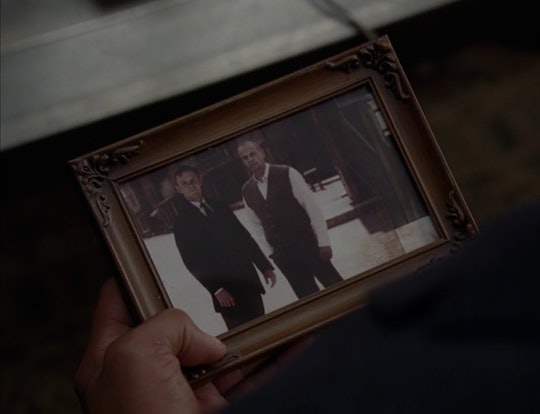 Who Is Arnold On 'Westworld'? Ford's Former Partner Is A Mysterious Character

As if the universe of Westworld weren't already sprawling and heavily-populated enough, we're already getting even more characters added to the mix – and it's only Episode 3. I'm not just talking about random side characters, either. During "The Stray," we learned about at least one figure who will undoubtedly prove very important to the larger story of the HBO sci-fi western series – and his name was Arnold. But exactly who is Arnold on Westworld?

Arnold's backstory – or at least a portion of it – was explained during park director Dr. Robert Ford's conversation with Bernard Lowe, the head of the behavior department and a programming specialist at Westworld. According to Ford, Arnold was his former partner in the early years of the park, when they worked on perfecting the hosts and didn't yet have to deal with the guests. At that time, the majority of the hosts were like Old Bill, who we briefly met in the series premiere – old, slightly rundown models, not at all ultra-realistic androids like Teddy, Maeve, and Dolores.

Apparently, Arnold wasn't happy with creating only a weak shadow of human intellect – he wanted to actually create consciousness, and in fact, was completely obsessed with the idea. Clearly, the dude had a God complex. He built his own version of consciousness in which the hosts heard their programming as an inner monologue, with the hope that their own inner voice would eventually take over function as actual "human" consciousness. As Ford put it, Arnold based his version on the bicameral mind theory, an IRL psychological hypothesis that argued that "the human mind once assumed a state in which cognitive functions were divided between one part of the brain which appears to be 'speaking,' and a second part which listens and obeys."

Ford disagreed with Arnold. From the get-go, he's been outspokenly of the mindset that the hosts are not real and that they are not conscious, which he repeated to Bernard for good measure during their conversation about Arnold, warning Bernard not to make his earlier colleague's mistake.

Eventually, Arnold died inside Westworld. Ford even insinuated to Bernard that it may have been a suicide – he mentioned that, though they said it was an accident, Arnold was an extremely careful person. Talk about creepy.

But why were Bernard and Ford even discussing Arnold to begin with? Well, as it turns out, though Arnold is (supposedly) dead, he may have a hand in the robots malfunctioning. Bernard approached Ford after Elsie pointed out that Walter, the first rogue robot, appeared to be having a conversation with an invisible someone – named Arnold – when he went haywire.

Seemingly, the remnants of Arnold's attempt at creating consciousness have left some of the hosts with the ability to "hear" Arnold in their heads – their "programming" as the "voice of God," where Arnold = God. Walter wasn't the only host to appear to be interacting with "Arnold" – Peter Abernathy was also conversing with an unseen person prior to being taken out of commission. And while the park employees haven't yet caught on, it definitely appears that Dolores is taking cues from an invisible voice inside her head, leading her to find the gun and repeatedly issuing commands to her (including, "remember" and "kill him").

Moviepilot also brought up an intriguing point. If you type "These violent delights have violent ends" three times into the "Chat With Aeden" bot on Discover Westworld (the show's official interactive online site), you get this creepy little beauty:

It's definitely a lot to process and brings up so many questions. Why is Arnold suddenly making his appearance now to screw around with the robots, presumably years after his death (or "death")? What's his end game in attempting to give his creations consciousness? Why is Ford so concerned that Bernard will repeat Arnold's mistakes, seeing consciousness in the hosts where there is none? It's heavy stuff, but it's all making me want to re-watch each episode 12 times to catch any and all clues before Episode 4 airs.