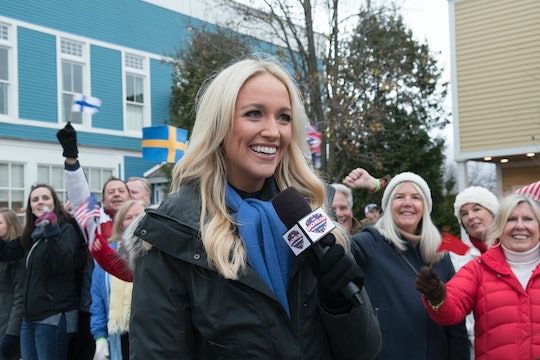 The Bachelor is gearing up for the latest addition to its franchise with The Bachelor Winter Games. It's a pretty bold move on behalf of ABC, since, typically, competing networks bow out of the ratings race for the duration of the Olympics in favor of airing reruns. But The Bachelor is trying its hand at competitive winter sports instead. Joining Chris Harrison, who shifts from sympathetic host to "commentator" for the special, are Hannah Storm and Ashley Brewer. So who is Ashley Brewer on The Bachelor Winter Games? She offers a little bit of everything, from keen sports analysis to hometown advantage.

Brewer is the weekend sports anchor and a reporter for ABC7 Eyewitness News at the network's Los Angeles affiliate KABC-TV. Herself an athlete, Brewer swam competitively on the University of Southern California's Varsity team before swimming the 100-meter backstroke in the 2012 Olympic Trials. After her time at USC, she covered college football in Arizona and eventually became the weekend sports anchor at ABC's Tuscon affiliate station. According to her ABC7 bio, she and her four siblings are all Division-I athletes: her brother Charles currently pitches for the Diamondbacks, her brother Chase played baseball at UCLA, her brother Connor plays football at the University of Virginia, and her sister Abby played sand football at the University of Southern California. Needless to say, Brewer knows her way around competitive sports.

She also offers a nice up-and-coming sports anchor complement to industry veteran Hannah Storm, a trailblazing female sports anchor who currently hosts SportsCenter on ESPN after more than three decades in the industry. Plus, having a badass all-female sportscaster lineup alongside presumable novice Chris Harrison is the perfect set-up for a Bachelor franchise sports competition.

The Bachelor Winter Games will be a mashup of winter sports à la the Olympics and Bachelor in Paradise's group dating setting. Fan favorites from the franchise — like Ben Higgins, Dean Unglert, Eric Bigger, Josiah Graham, Luke Pell, Ashley Iaconetti, and Bibiana Julian — return to compete for "Team USA" against competitors from various international iterations of The Bachelor/Bachelorette. The series is betting on language barriers becoming a hilarious obstacle to both team communication and the search for love, since the other countries represented include Team Canada, Australia, Switzerland and Germany, New Zealand, Finland, UK, Sweden, Japan, and China. Yes, even that one Aussie Bachelor contestant who ran off with another woman from her season's pool of competitors will be there. (Her name is Tiffany Scanlon, in case you'd like to root for her.)

Winners of the games, which run the gambit from winter biathlon to ice dancing, receive date cards, and once everyone is back indoors, the race for roses is on. Just like Bachelor in Paradise, those left without one at the end of the rose ceremony will have to go home.

Spicing up the competition will be appearances by paired-off Bachelor alumni like Ryan and Trista Sutter, Arie Luyendyk Jr., Rachel Lindsay, and JoJo Fletcher, while figure skating champions Nancy Kerrigan, Tai Babilonia, and Randy Gardner will join the ranks to judge the figure skating competition. There's also an opening parade in the shoot location's ski resort town of Wilmington, Vermont as well as a closing ceremony at the end of the competition.