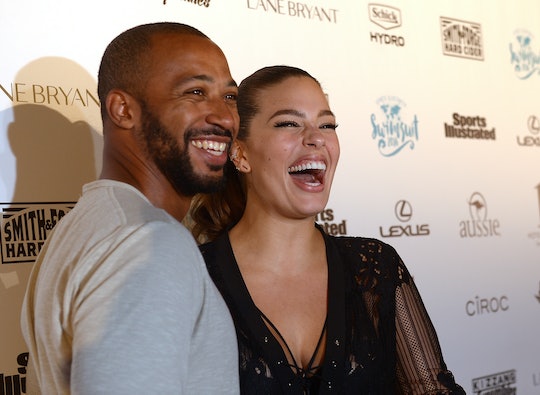 From supermodel to supermom; Ashley Graham is expecting her first child. The model announced she was pregnant on Wednesday in a super sweet video on Instagram. But who is Ashley Graham's husband? Justin Ervin joined his wife to share the exciting news of her pregnancy.

A video shared to the model's official Instagram on Wednesday appeared to show Graham and Ervin adjusting their camera in an attempt to find that perfect selfie angle. "Surprise," they shout as the camera slowly zooms out to reveal the couple tenderly touching Graham's growing bump.

According to Graham, the couple decided to celebrate their nine-year wedding anniversary by sharing the news that they were expecting their first child together. "Nine years ago today, I married the love of my life," Graham wrote in the video's caption. "It has been the best journey with my favorite person in the world! Today, we are feeling so blessed, grateful and excited to celebrate with our GROWING FAMILY!" She then wished her husband a happy anniversary, adding that, "Life is about to get even better."

In a pregnancy announcement posted to his own Instagram account, Ervin shared a sweet snap of him and Graham holding up a sonogram picture. In the caption, he called Graham his "forever love" and "daily inspiration" before wishing her a happy anniversary. "These 9 years have played out like a lifetime," he wrote. "I guess it's because my life really started once you came into it. Now that we've made a life together, let's make a life together. I love you and I love us. All of us..."

Ervin has worked in TV and film since 2005, according to his IMDB profile, and over the course of his career, he's served as a cinematographer, director, producer, and writer. As In A Mirror, the first documentary film he completed, chronicled Senegalese merchant-immigrants who lived in Florence, Italy, according to a bio listed on his professional website. His first feature-length documentary, Elephant in the Room, won Best Documentary Short at the Garden State Film Festival. LEAP, another film Ervin worked on, won the audience award in the Short Film competition hosted by New Filmmakers LA. More recently, he has worked on a docuseries titled, Essence Black Girl Magic: A'Dorian Thomas.

Ervin also founded Element Films Inc., a company he describes on his website as being "dedicated to excellence in digital motion picture imaging." Through Element Films Inc. he has reportedly shot video for Vogue, Conde Nast, Guess, CNN, Pantene, Netflix, and BET to name only a few.

Graham and Ervin met at a church in New York City, as Women's Health has previously reported. In her book, A New Model: What Confidence, Beauty, and Power Really Look Like, the model revealed that her relationship with Ervin unfolded naturally in a very sweet and innocent manner. "All I wanted to do was keep talking to Justin," she wrote of their courtship, according to Business Insider. "My romance with Justin was innocent and sweet. We went rollerblading and biking; we did karaoke, went to the movies, took an improv class together. Because we weren't sleeping together — for Justin, abstinence was a firm commitment to his faith — we never tempted ourselves by going over to each other's apartments late at night."

After dating for roughly a year, the couple married in 2010. Although the couple have not shared any information about Graham's due date, it's clear that they'll be celebrating their next anniversary as a family of three.

More Like This
Aww! 2-Year-Old Archie Is "Very Happy" To Be A Big Brother
Celine Dion Shares She's Been Diagnosed With A Rare Neurological Disorder
'Harry & Meghan' Shares Never-Before-Seen Photos Of Archie & Lilibet
Meghan Markle Wrote An Emotional Poem About Being A Child Of Divorce When She Was 12