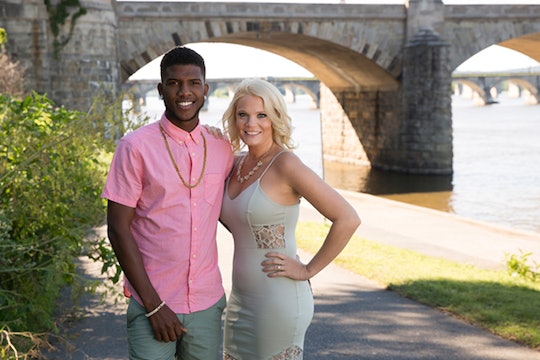 Ashley On '90 Day Fiance' Has An Interesting Life Story

A new season of 90 Day Fiancé is upon us, and with it are all-new couples. One of the Americans looking for love is Ashley. So, who is Ashley on 90 Day Fiancé? She had one of the most shocking moments of the Season 6 trailer, in my opinion.

According to TLC’s biographies of the 90 Day Fiancé Season 6 cast, Ashley is a 31-year-old from Pennsylvania. She met her partner for the season — 20-year-old Jay from Jamaica — while on the island for a wedding. Ashley didn’t expect to see him ever again, but Jay tracked her down on social media. After eight days of dating, Jay proposed (but that’s actually not the fastest engagement of the season. That award goes to Eric and Leida, who became engaged after two days).

TLC also revealed that Ashley had two broken engagements before, so she’s hoping to be with Jay forever. “But with Jay being so young and having had a wild lifestyle, she's hoping he can be serious about their relationship so that she'll finally be able to stop searching for long lasting love.”

Ashley’s desire to find her forever love is clear from the 90 Day Fiancé Season 6 trailer. “She’s so eager to be in love, she lets red flags just go,” her friend said in a confessional, intercut with clips of Ashley and Jay together. The next scene shows Ashley and said friend at lunch and Ashley remarks, “If Jesus came down from heaven right now and said he [Jay] cheated on me, I wouldn’t do anything about it.” Her friend gave the most WTF look I may have ever seen on one of these shows. I mean, if I'm honest: same.

The trailer made it appear that Ashley may have her doubts, though. “Jay used to run through women,” Ashley says in her own confessional in the trailer; in the clip that follows, Jay asks the same friend that’s skeptical of the relationship why she told Ashley he was cheating on her.

Not everything about Jay and Ashley’s relationship from the get-go seemed riddled with cheating rumors, however, Earlier on in the trailer, viewers can see Ashley and Jay interact together. If this visa is approved tomorrow,” he told her in the clip, “I’m gonna be right here in your bed, giving you the ‘d’ every day.” From Ashley’s smile, she was into it.

The internet apparently hasn't tracked down Ashley’s social media profiles yet, so all fans know thus far is from TLC’s press release and the trailer. For those who have never watched 90 Day Fiancé before — welcome to one of the most unique and dramatic shows reality television has to offer. The show follows couples (one American and one foreigner) who have 90 days to marry before the foreigner’s visa expires and they have to return to their native country.

The new 90 Day Fiancé season comes off the heels of the latest season of 90 Day Fiancé: Before the 90 Days which, as told so succinctly by the title, occurs before the K-1 visa process has begun. In fact, in all but one case last season, the Americans went overseas to meet their partners in their native countries.

That season ended with a number of marriages and breakups, and I wouldn’t be surprised if Season 6 of 90 Day Fiancé ends the same way. Viewers will have to watch this season to see if Ashley and Jay end up in the “marriage” or “breakup” category.