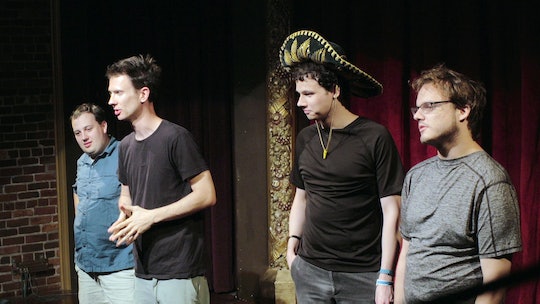 Comedy Troupe Asperger's Are Us Goes On Tour For HBO

On Tour With Asperger's Are Us premieres on HBO on Apr. 30 with not one, but two new episodes. Each installment is only half an hour long, so the double premiere gives audiences some time to really get to know the group they'll be following on a season-long tour. But before you become better acquainted with the members of Asperger's Are Us, you'll have to be introduced to them. So who is Asperger's Are Us?

Asperger's Are Us is the very first comedy troupe in which every member has Asperger's. According to HBO's description of the show, members Noah Britton, Ethan Finlan, Jack Hanke, and New Michael Ingemi first met years ago at a camp for kids with autism. Eventually they went on to form their comedy group and have been touring together since 2010. But their first cross-country tour, which takes them from Boston to Los Angeles, was captured for the six-episode HBO docuseries.

They travel from city to city in an unreliable RV to deliver shows comprised of funny skits and Q&A sessions where they discuss their experiences as comedians with Asperger's. The series was produced by Jay and Mark Duplass, so if their sense of humor is to your liking, you may find yourself appreciating On Tour With, too.

All four members of Asperger's Are Us are from New England. When they met as kids, Britton was their counselor; according to BU Today, he found Finlan, Hanke, and Ingemi so funny that it was his idea to reunite as a comedy troupe years later. In the interim, he formed the punk band and performance art group the Best Thing Ever. But he's been very successful with comedy, perhaps because he works so well with his fellow group members.

Their comedy focuses on absurd situations and puns, and their shows have a distinctly dry tone. Both Britton and Hanke have made it clear they're not out to "buck stereotypes" about autistic people being (or, rather, not being) funny. "Why would we waste our time serving the interest of people who walk around believing such garbage?" Britton said to the Chicago Reader. "But at the same time, we hope they leave our show realizing they were completely wrong."

Hanke reiterated that point while talking to The Bell. He explained that they were not "interested in being advocates," but in "producing comedy for its own sake." While he thought it was great if people came to see their shows and realized that autistic people can be hilarious, he also added, "Ideally that's something that they would have known already." Couldn't say it better than that.

Mark Duplass told The Advocate that they felt there was so much more material to explore with these comedians. "But [the film] was just really scratching the surface of the story," he told the publication. "So then we had this idea, 'How cool would it be if we could really get these guys out on the road, and get their career a boost, and it was what they really wanted to do?'"

You'll be able to see exactly what Asperger's Are Us wants to do every Tuesday on HBO.