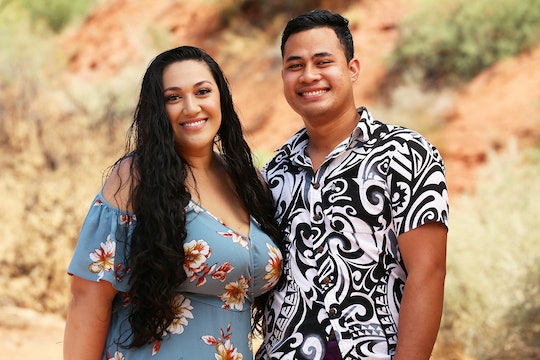 Asuelu's Brother On '90 Day Fiance' Made Some Seriously Inappropriate Comments

You don't tune into 90 Day Fiancé for the scenery. Part of what makes reality TV so crave-worthy is the extreme nature of human relationships. When you take international couples attempting to navigate differences in culture, beliefs, and distance, you're bound to hit all sides of those extremes. One of the couples, Kalani and Asuelu, have a lot going on, including some difficult relations with each others' families. Speaking of which, who is Asuelu's brother on 90 Day Fiancé?

The comment Asuelu's brother made to Kalani was sexual in nature and pretty darn offensive, though I couldn't locate an actual name anywhere on the web. During a lunch outing with Kalani's sister, Kolini, baby Oliver, and Asuelu, they discussed Kalani's cold feet and why Asuelu feels Kalani doesn't care for his family. There has been quite a bit of tension that's only gotten, well, more tense. Kalani said during the video chat with Asuelu's brother, he offended her by saying, "when you're done with her, I want a turn with her," according to footage from the show. Uh, excuse me? Asuelu didn't seem to know how to react, almost shutting down entirely from the conversation. Asuelu defended his brother by saying their cultures (he is from Samoa) viewed marriage and women differently — especially towards those from other cultures.

You'd think the comment from Asuelu's brother would be enough for Kalani to call the wedding off, and it doesn't seem like she's far off. When gown shopping with Kolini, Kalani came clean about her lack of enthusiasm towards the marriage, or Asuelu. The two met while on vacation and Kalani lost her virginity to him and became pregnant with Oliver. Due to Kalani's Mormon upbringing, none of this flew with her family, causing an even bigger rift before the couple says "I do."

“I still have serious doubts about getting married,” Kalani said. “I feel like, ‘Why am I looking for a dress to marry someone that I don’t even know if I want to marry?'” Uh-oh. Looks like more trouble in paradise.

Currently, the couple lives in Utah with Kalani's brother, Nick. Kalani's family have made it clear they don't agree with the marriage (and don't like Asuela) with her sister, Kolini saying she "hates" him. Ouch.

Despite their many, many differences, it's hard to say what will happen with Kalani and Asuelu after the whole brother thing. It's not a passive comment and shouldn't go ignored. And though Kalani's brought her own drama into the situation, she has a right to feel the way she does — especially in regards to a future brother-in-law.

Maybe Kalani and Asuelu will wed, and maybe they won't. No matter the outcome, Asuelu's brother should never have made the comment he did. I think we all can agree on that.