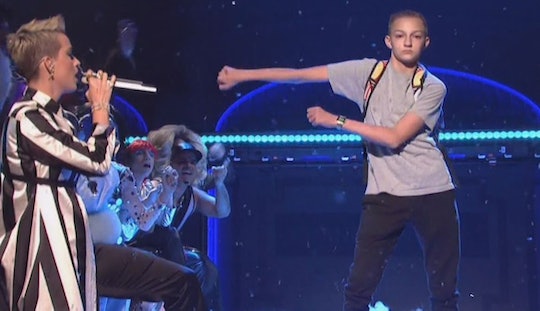 Who Is Backpack Kid In Katy Perry's "Swish Swish" Video?

Earlier this week, MTV Video Music Awards host Katy Perry released the official video for her hit single, "Swish Swish," featuring tons of stars and Backpack Kid, who stole the show during her Saturday Night Live set on May 20. But who is Backpack Kid in Katy Perry's "Swish Swish" video? The 15-year-old teenager from Lawrenceville, Georgia is a star in his own right.

Russell Horning, a.k.a. Backpack Kid, captured the attention of millions of SNL viewers when he took the stage during Perry's "Swish Swish" performance, according to Deadline Hollywood. With a deadpan expression, Horning swung his stiff arms from side to side, increasing speed while swaying his hips. His lightning fast arm movements had everyone dazed, to say the least.

But how did Horning come to know Perry and perform with her on Saturday Night Live? It seems it was a meeting by chance. According to USA Today, the 15-year-old Georgia native was discovered after his Instagram account, @i_got_barzz, showed up on her recommended page. Horning told USA Today via a text message interview,

[She] saw that I enjoyed doing what I did and liked that about me. She invited me to perform with her.

According to Complex, Horning first developed his signature dance, which he calls The Russell, back in 2014. He posted his first Instagram showing off his moves as a joke after friends at a church camp influenced him to.

But Horning was not always known as "Backpack Kid." He wouldn't earn that nickname until his appearance on Saturday Night Live alongside drag queens and club kids, according to Complex. Also, Perry wouldn't be the first celebrity to notice Horning and his stiff-armed moves; in December, Rihanna posted a video of the self-taught dancer to her Instagram page as way to describe her mood after learning she received eight Grammy nominations, Complex reported. He also appeared in the video for Ayo & Teo's song "Rolex."

The exposure has gotten Horning a lot of internet fame. According to USA Today, he racked up 55,000 followers in two days after Rihanna's Instagram shout-out. And his performance with Perry had garnered him hundreds of thousands of more followers as well; according to his Instagram account, he has more than 830,000 fans.

Horning and his stiff arms also makes a quick appearance in Perry's star-studded video for "Swish Swish." It's clear Backpack Kid has made an impression on the singer and America at large. Who knows where fans will see is swinging arms next?