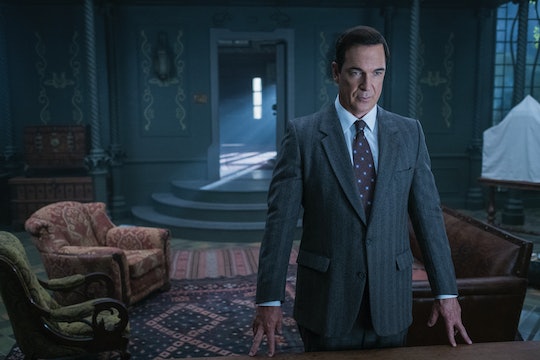 Lemony Snicket Teases An Unfortunate Past

(Warning: this post contains unfortunate spoilers from Episode 2.) There was never any doubt in my mind that Netflix's latest creation would be highly enjoyable (despite what the title suggests). But while the main characters have proven to be very interesting, no one is more intriguing than the narrator himself, Lemony Snicket, played by Patrick Warburton. This is not only due to his unique form of storytelling (breaking the fourth wall and speaking directly to the audience), but also because of the mystery surrounding his own storyline. For example, who is Beatrice on Netflix's A Series of Unfortunate Events? Based on the very little that we know so far, I'd say she serves as a key part to his mysterious past.

During the episode, Lemony Snicket took viewers on a tour of his private room/study, where he keeps his most valuable possessions. Along with his in-depth research on the Baudelaire family and a few precious collectibles, there's also a blurry, framed photograph of a woman, who he clearly thinks very fondly of. He didn't elaborate much on how he knew her or really reveal any major aspect about her that could help us figure out her connection to the story. (Plus, the image was too blurry to give away any further clues as well.) But doesn't take a genius to see that this Beatrice was someone he was very much in love with many years ago.

Now, for those of you who don't want to be bothered with book spoilers, I suggest you turn back now while you still have the chance. As for the rest of you, let me take things a little bit further and make a prediction as to who this person ends up being. Considering that the series is based off of the books, I'm going to make an assumption and say that this is actually Violet, Klaus, and Sunny's mother.

So far in the series, she's only been credited as "Mother" without ever being given a first name. However, if you're a fan of the books you'd know that the name of Mrs. Baudelaire is actually Beatrice, who has always been the unrequited love interest of — you guessed it — Lemony Snicket. So unless the show plans on making major changes to this aspect of the story in order to throw us off, I'd say it's safe to say that Snicket's Beatrice and the children's mother are one in the same.

You would think we'll eventually get a confirmation on this as the series progresses and learn more about how they came to know each other. In the books, they were childhood friends, which is giving off a very Severus Snape-Lily Potter vibe to me, in many ways. This would also help to explain why he is so invested in solving the mystery behind what happened to the Baudelaire parents. He's concerned about the woman he loves. None of this has yet to be confirmed on the show, but in time I'm sure our narrator will open up more and more, thereby inadvertently explaining his own series of unfortunate events that have led him here.