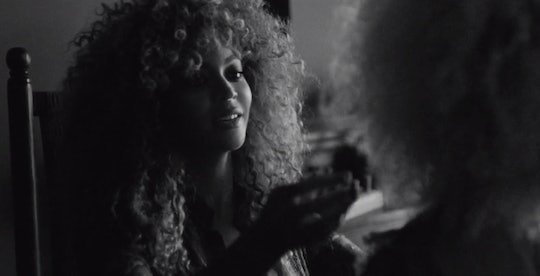 Who Is Becky With The Good Hair In ‘Lemonade’? Beyoncé Has People Talking About Her

On HBO, history was made. Beyoncé took over the world — again — when her Lemonade special aired on HBO. During the Lemonade special, Beyoncé sang about "Becky with the good hair," which will probably leave you asking (read: screaming) Who is Becky with the good hair? Well, that's a great question, and certainly one many people have. After Beyoncé said that line during Lemonade, many people were wondering the exact same thing — who is this girl and what has she done to our Queen Bey?

Well, there's not much known about Becky — if she's even real. Of course, it is hard to ignore the fact that Lemonade seems to have a serious adultery theme to it, with lines that scream cheating. When the Becky line dropped, people were quick to blame the unknown Becky for the cryptic messages Beyoncé seems to be sending to viewers. "If you try this sh*t again, you're gonna lose your wife," is just one line that most people are going to pair with the Becky line, and you can't blame them.

There's a few options behind who the Beyoncé mentioned Becky is. It could be someone who was involved in something that hurt Beyoncé. (I'll let your imagination run with that.) The other option is that Becky isn't real, and we're just being messed with by Beyoncé. While I will defend her until the end, I am not too naive to think that she wouldn't just screw with us by making up a common name to throw us off the scent (of whatever we're supposed to be thinking during this performance piece).

People on Twitter are definitely wondering who Becky is.

So, if you meet a Becky with good hair, then be wary. Seems like Beyoncé is sending the Bey Hive after her. And if you are Becky with some good hair — have fun with the many, many jokes coming your way. And maybe look into buying a hat?