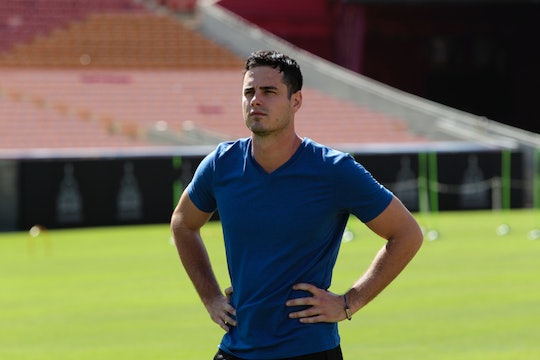 Who Is Ben Talking To In The Bathroom On 'The Bachelor' Finale? Either Way, It's Harmful

There's been a lot of discussion on if Ben Higgins is the perfect Bachelor. Before the season even began, Ben was labeled — cleverly, I might add — as being a Perfect Ben (like a Perfect 10, but Ben...). I can't argue with that. Ben has proved to be a really good Bachelor. He's respectful, invested, and was ready to open up his heart. Unfortunately, he opened his heart up so much that he ended up saying "I Love You" to two women. Now, pulling from the Bachelor finale promo, fans see — or should I say overhear? — a conversation between Ben and one of his final two women in a bathroom. But who is Ben talking to in the bathroom during the Bachelor finale? Is it JoJo he's trying to comfort, or is it Lauren?

No matter who he's trying to comfort, I think we can all agree that he's failing at it. You don't want to tell someone that you're in love with her only to share that you're also in love with someone else seconds later. He's trying to be transparent, and I can commend that, but this is just one thing that I think is going to get Ben in trouble when he's breaking someone's heart.

So, who is Ben trying to console, in his Perfect Ben way? Let's examine the clip one more time.

From the sound of it — and we've been listening to their voices for some time now, so I say this with confidence — JoJo is the woman Ben is talking to on the bathroom floor. It also makes sense that it would be JoJo, because between her and Lauren, she has been the most hesitant about the process the show presents to its contestants.

So, what does this bathroom scene mean for the finale? Well, there are a few different ways to approach this. Both have to do with Ben's transparency, but one ends with JoJo having a ring on her finger and the other — well, the other doesn't.

If Ben is choosing to be transparent with JoJo and tell her he loves Lauren, it could be because he's prepping her for disappointment on the final rose ceremony night. If she has an idea that Ben is also in love with Lauren, she might not be so surprised if she is dumped in the finale. He's almost prepping her to understand why he may not propose to her.

On the other hand, Ben being honest with her might be a sign that he's already starting his apology tour. He might feel like JoJo's going to learn eventually that he told Lauren that he loved her, so he might as well get it out in the open before she sees it on television.