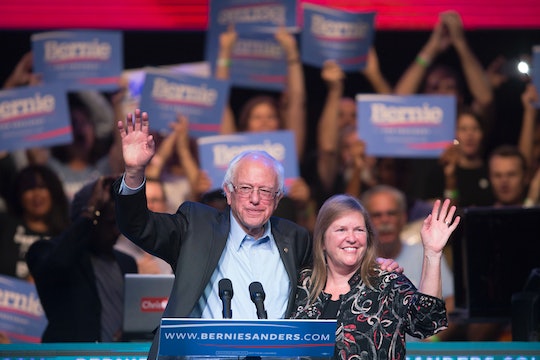 Who Is Bernie Sanders' Wife? Jane Sanders Is Much More Than The Woman Behind The Man

Ahead of Saturday's Democratic debate, we wanted to find out a little more about America's potential First Lady, Jane O'Meara Sanders, wife of Sen. Bernie Sanders. She's been largely kept out of the spotlight — mostly seen at her husband's side — but if Sanders survives the Democratic nomination, a whole lot more light will soon cast in her direction as America wants to learn more about Sanders and his family. So exactly who is Bernie Sanders' wife, Jane? Here's what we know.

That's right: Jane O'Meara is Bernie's second wife — and Bernie's not her first husband, either. Sanders was first married from 1964 to 1966 to Deborah Shiling. They bought a summer home together in Vermont and that was pretty much that. After their divorce, Sanders would go on to have a child with Susan Campbell Mott three years later. Jane O'Meara separated from husband David Driscoll in the 1970s after having three children with him. Jane met Bernie in 1981, on the same night he won his first mayoral campaign in Burlington, Vermont. The two would later marry in 1988 after a seven-year courtship. Their family has blended all four children together: Jane's two daughters, Carina and Heather; her son, Dave; and Bernie's son, Levi.

She's Got Some Serious Academic Street Cred — And A Little Controversy

Jane Sanders not only has her doctorate (she mostly doesn't use the honorific), but Dr. Sanders has served as both the provost and interim president of Goddard College in Vermont (where she earned her undergraduate degree in social work), and, most recently, served a seven-year term as president of Burlington College that ended in 2011. Sanders' departure from Burlington College certainly wasn't without controversy, as students, faculty, and staff called for her departure. Adding further controversy was the news that she received a $200,000 severance package, criticized by some as the very type of golden parachute her husband rallies against from Wall Street execs.

Even though they grew up just 15 blocks from each other in Brooklyn, New York, Jane was raised Roman Catholic. Bernie, who was raised Jewish and considers himself "not particularly religious" has expressed admiration for the current leader of the Catholic Church, Pope Francis. In a candid interview with the Burlington Free Press this past August, Jane admitted she suffered a crisis of faith after the death of her brother in 1966:

I think that as many Catholics, you have a complicated relationship with the church. When my brother died, I felt like there couldn't be a God. I just felt that way and for a couple of years, I just felt turned away from the church.

Crisis of faith since resolved, Jane isn't a regular Sunday churchgoer, but she does visit Saint Anne's Shrine on the shores of Lake Champlain in Vermont in times of need.

Bernie Has Been Both Her Husband And Boss

The couple have certainly led a busy life together, balancing congressional terms with college presidencies. The secret, as Jane told The American Spectator in 1995: "If I didn't work for him I'd never see him." According to a recent article at The Hill, Jane has served as "administrative assistant, spokeswoman, policy adviser, chief of staff and media buyer" working for her husband.

As elusive as Mrs. Sanders has been these last few months, her presence is growing on Sanders' campaign trail as his popularity continues to soar. And as awesome as it would be to have the First Gentleman in the White House, Jane Sanders would certainly be a respectable First Lady indeed.