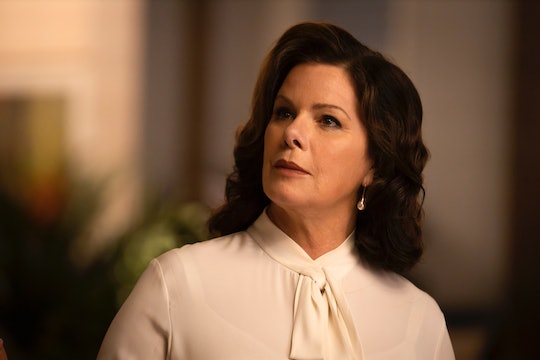 Marcia Gay Harden Is Shaking Things Up on 'Reef Break'

From jet ski assassins to hijackers, Cat Chambers (Poppy Montgomery) helped bring down plenty of villains on this season of Reef Break. The thief-turned-fixer’s instincts are proving to be useful for the island’s government and local police, but in a sneak peek for the upcoming episode, she’s facing off with a different kind of foe. The new character is a thrilling new match for Cat, so fans are wondering, who is Betty Ann Miller on Reef Break?

To start, the character is played by actress Marcia Gay Harden, who you may recognize from her various award-winning roles over the years. Harden has been featured in films like Meet Joe Black, Mystic River, and the Fifty Shades series of films, but she is most known for her Academy Award-winning performance as Lee Krasner in the 2000 film, Pollock. The actress is no stranger to TV either. She’s been in countless shows, including The Newsroom and How To Get Away with Murder, and she had a recurring role in the CBS medical drama, Code Black.

On Episode 9 of Reef Break, titled “The Hohenzollern Collection,” Harden plays Betty Ann Miller, a cunning woman who is looking to make a deal with Cat. “When Betty Ann Miller arrives on The Reef, she presents Cat Chambers an offer too good to refuse,” reads an ABC synopsis for the episode. “But when Cat considers turning back to her old ways, she turns the tables on the situation. But don’t be fooled, Betty Ann may look sweet and demure, but she proves to be a formidable match for Cat.”

In a preview for the episode, Cat talks to Betty Ann about millions of dollars of jewels that were stolen, and Betty Ann asks Cat to steal them back for her. But later, it looks like things don’t go according to plan, so Betty Ann pulls a gun on Cat. When Cat tells her pulling the trigger will result in the cops descending upon her, Betty Ann ends up being one step ahead. She quietly shoots the gun to the side, revealing a silencer, and pointedly asks Cat, “I didn’t hear a thing, did you?”

As the show heads towards its season finale, things are getting more complicated for Cat. In an interview with Hollywood Life, Reef Break showrunner and lead actress Poppy Montgomery said fans can expect a lot of exciting twists and turns before the season ends. “It does end on a cliffhanger, actually a big cliffhanger,” she teased. “Cat finds herself on the wrong side of the law. So it all goes kind of south in the last two episodes.”

She also told the outlet that if the show returns for Season 2, she’d like to focus on Cat’s past. “I think her past, how she ended up who she is and where definitely needs to be explored more,” Montogomery revealed. “And her pro-surfing past and her criminal past. She ran with a gang of bad surfers so I’d like to see us dive into that more.”

It’s still unclear how Cat’s relationship with Betty Ann will pan out by the end of the season, but after seeing her give Cat a run for her money, I’m sure fans will want to see her character return.