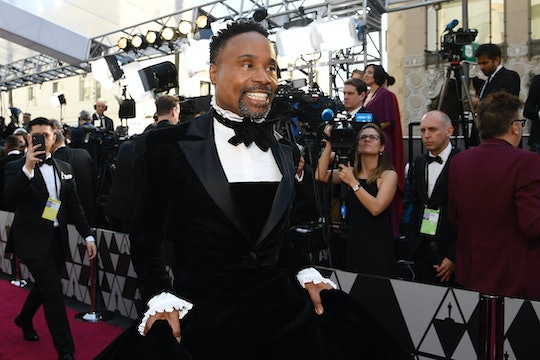 The red carpet is a place for celebrities to shine, a sentiment one actor-singer truly took to heart on Sunday, Feb. 24 when he showed up to the Oscars in mind-blowing and totally stunning outfit. So, who exactly is Billy Porter? There's a good chance you've probably seen Porter on one of your favorite TV shows.

Sometimes the Oscars red carpet can be a little boring, as it's rare for a celeb to don an exceptionally creative outfit to the show. Most stars either opt for a sleek tux or standard evening gown, which gets old fast if you're someone who tunes into the event every year. Luckily for all of the viewers at home hoping for something different, Porter graced the event wearing a tuxedo-gown. You guys, I think I've just found my new fashion icon.

Designed by none other than Christian Siriano, the black ensemble perfectly combines two traditional styles with its ballgown bottom and classic tux up top. The look — all the way from its ruffled sleeves and long train — is the definition of a showstopper, folks.

Oh, and I did I mention that the tuxedo-gown is all velvet? Somehow that detail makes the whole look that more iconic.

So, how did Porter decide on this unique look for the Oscars? As it turns out, he aspires to push the boundaries of "masculinity" with his fashion choices.

"My goal is to be a walking piece of political art every time I show up. To challenge expectations. What is masculinity? What does that mean?" he told Vogue about deciding on his outfit for the Oscars. "Women show up every day in pants, but the minute a man wears a dress, the seas part. It happened to me at the Golden Globes [when I wore a pink cape], and I was like, really? Y’all trippin’? I stopped traffic!"

True dat — there's absolutely nothing outlandish about a man in a dress.

After Porter's success at the Golden Globes in January, he's hopeful that, going forward, more actors will feel comfortable "stepping outside of the status quo." In the same interview with Vogue, he explained:

That Globes outfit changed everything for me. I had the courage to push the status quo. I believe men on the red carpet would love to play more. This industry masquerades itself as inclusive, but actors are afraid to play, because if they show up as something outside of the status quo, they might be received as feminine, and, as a result, they won’t get that masculine job, that superhero job. And that’s the truth. I’ve been confronted with that.

When he's not busy breaking down gender stereotypes on the red carpet, Porter spends his days acting. He most recently starred in American Horror Story and Pose, a dance musical set in the '80s.

Prior to his television career, Porter was an accomplished Broadway singer and pop vocalist. He lent his vocals to hits like The First Wives Club (OK, he's definitely my new favorite person now) and the animated film, Anastasia.

Translation: Porter is a star on and off the red carpet. And I don't know about you guys, but I can't wait to see what he does next.