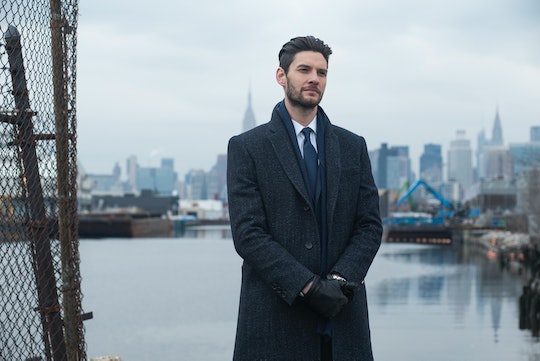 Billy Russo From 'The Punisher' Has An Interesting Comic Book Origin

The Punisher is finally here and with it comes a whole new group of comic books characters making there way to the small screen. While the show follows Frank Castle, it also follows Homeland Security agent Dinah Madani. Although Dinah's name probably isn't familiar to comic book readers, the man she's trying to get close to, Billy Russo, most certainly is. So who is Billy Russo on The Punisher? He has an interesting connection to Frank. Warning: spoilers ahead for Episode 2!

As Dinah looked into Frank Castle and her own case in Afghanistan, she learned about Billy, who was in the Special Forces with Frank. Billy is the founder and CEO of a private military corporation called Anvil, which trains military operatives and agents. When he and Dinah went out for drinks, he revealed that he and Frank were "best buddies" in the Special Forces. He also didn't fault Frank for all the people he killed and seemed to support his friend's work as the Punisher, though Dinah didn't agree. While Dinah and Billy definitely hit it off, it's clear she's still suspicious of him, as she should be.

In the comics, Billy was also known as the villain Jigsaw, who was Frank's archenemy, thus is seems fair to assume Frank's previous friendship with Billy won't last when they meet up again in the present, which is bound to happen eventually.

Billy's history is a bit different in the comic books, which isn't that surprising since the Marvel Cinematic Universe typically takes liberties with the source material. Originally, Billy was an assassin for the Maggia and Costa crime families. He was originally hired by Bruno Costa to kill the assassin who failed to kill Frank, and though he killed all his targets, Frank got away. In retribution, Frank tracked down Billy and threw him through a glass pane head-first. Though he survived, his face was torn to shreds and had to be stitched back together like a jigsaw puzzle, hence his new name.

After this, Billy became obsessed with killing Frank, so much so that when it appeared Frank had been killed (he hadn't), Billy went after the men who "killed" him, mad that they did it first. Over the course of the comics Billy and Frank continued to go head to head a number of times, and Billy also faced off against Daredevil as well. For now, there's been no real resolution to Billy and Frank's ongoing feud, so anything could happen between the pair on the show.

It's also possibly that Billy doesn't end up being a villain on the TV series. He did seem very supportive of Frank when talking to Dinah, but he also could've been lying. Or, he could want to work with Frank for his own nefarious purposes, and seeing as Frank prefers to work alone (just ask Micro) it seems doubtful Frank would want anything to do with whatever Billy might be up to. Thus, that could definitely cause a rift between the two friends.

At this point, it's really too early to call what Billy has up his sleeves. Does he really like Dinah or is he just playing her? Is he really using Anvil to train government officials or is he doing something else with the company? Most importantly, why did Dinah's boss not want her talking to him? Is Billy really connected to the conspiracy Frank and Dinah are investigating? There are still a lot of questions that need to be answered. Hopefully, things will become more clear in the following episodes.

The Punisher is now streaming on Netflix.