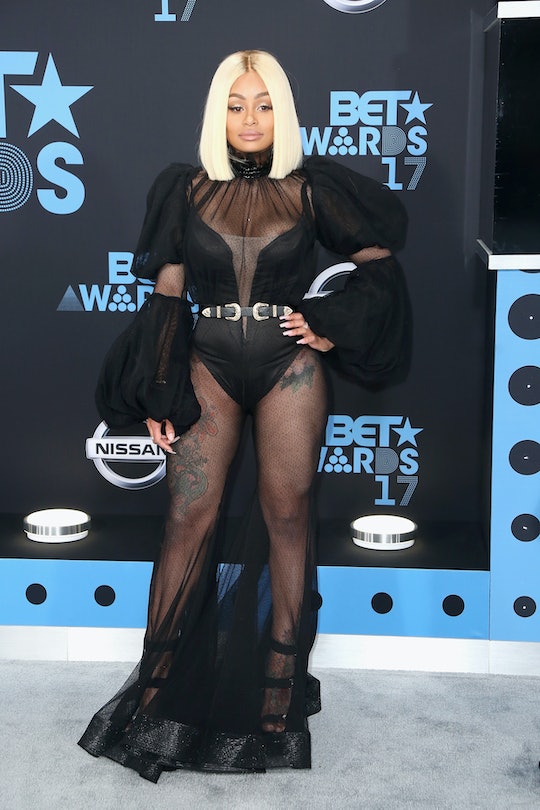 Blac Chyna Can Date Whomever She Wants

On Monday, a Los Angeles court granted Blac Chyna a temporary restraining against her ex, Rob Kardashian. The order is the latest development in what had been a tumultuous relationship between the celebrity couple. Last week, Kardashian allegedly posted a series of sexually explicit photos of someone he claimed was Chyna on social media. Now, Chyna said there's zero chance she and Kardashian will get back together, and that she wants to focus on coparenting their baby daughter, Dream. Given the turn of events and society's obsession with celebrities' love lives in general, fans will undoubtedly want to know who Blac Chyna is dating. (Kardashian's representative did not respond to Romper's request for comment regarding the restraining order or the photos.)

After the Instagram posts grabbed headlines nationwide last week, Bloom released a statement that, in part, addressed him directly and asserted her clients' autonomy in all aspects of her life:

It's easy to interpret Kardashian's social media stunt as an attempt to slut-shame his ex into submission, as Bloom surely did. And as Bloom so clearly wrote Chyna should have the freedom to date whomever she wants without fear of retribution or shaming.

In the beginning of June, Chyna reportedly told paparazzi that she and her hairstylist Kellon Deryck had been dating for a while when they spotted the two walking down the street together. TMZ soon speculated that she was joking, however. And more recently, just a few days after the Instagram posts went public, the gossip site Celebrity Insider reported that she was dating a man named Rarri True. Citing anonymous, the site claimed that True had bought Chyna $135,648 worth of jewelry — a Rolex watch, a gold necklace, and a pair of diamond earrings — that he then decided not to give her when Kardashian accused her of infidelity. Remember: That's just a rumor, and none of it has been confirmed by Chyna.

The fact is, Chyna will be under more scrutiny than ever now that she's been granted a restraining order and will likely have to make custody arrangements with him, too. She probably will date as well, and some people will be inclined to shame her for that, or to claim that it proves Kardashian right. But the fact is that Chyna retains the same right to do what she pleases in her personal life that any person does — regardless of the high-profile allegations her ex very publicly leveled against her.