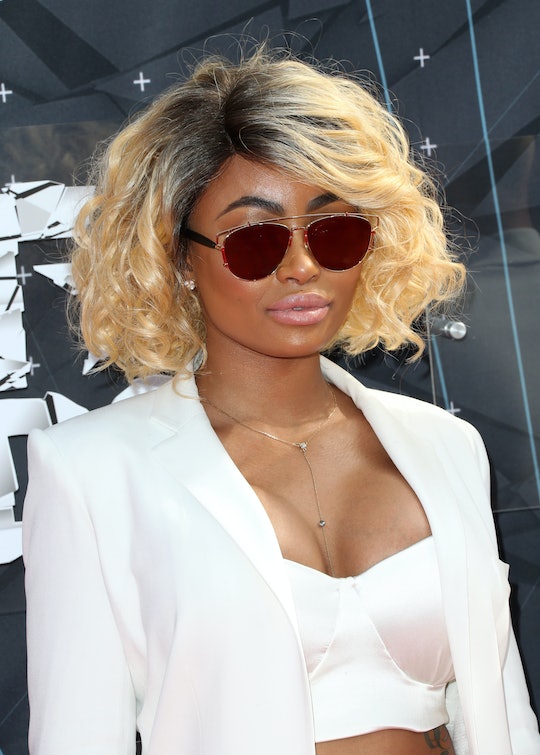 Who Is Blac Chyna? She Might Be Dating Rob Kardashian & The Internet Is Losing It

An Instagram photo sent the internet into a frenzy on Monday. Blac Chyna, best known as Tyga’s ex-fiancee and mother of his child, Instagrammed a photo of someone's arm around her, and the internet believed that the tattoo's on the mysterious arm looked a lot like Rob Kardashian's. But just who is Back Chyna? If the former model is dating Kardashian, it would be super controversial.

The mysterious Instagram didn't reveal any details about the man in the photo. “The beginning ☘,” the caption read. Though the post was simple, people noticed that the tattoos on said arm looked eerily similar to a certain someone's. However, neither Chyna nor Kardashian have responded to the rumor.

So, why is this new relationship so controversial? Chyna and Tyga were in a relationship from 2011 to 2014, and have a 3-year-old son named King Cairo. While she was besties with Kim Kardashian for years, the friendship dissolved when Tyga allegedly started dating Kylie Jenner in late 2014. And since the Jenner was only 17 at the time, their suspected relationship came under plenty of scrutiny before they even became public in August 2015. One person who didn’t hold back was Chyna’s bestie and Kanye West’s ex Amber Rose, who had plenty to say when she visited The Breakfast Club in February 2015.

“She’s [Kylie] a baby, she needs to go to bed at 7 o’clock and relax,” Rose said during the interview, according to Hollywood Life. “That’s ridiculous. He [Tyga] should be ashamed of himself. That’s how I feel. For sure. He has a beautiful woman and a baby and left that for a 16-year-old who just turned 17.” But being Chyna’s friend, the comments didn’t come out of nowhere. Not only did Chyna and Rose have a reality show in the works, but they wore matching anti-slut shaming outfits at the 2015 VMA’s.

In addition to being an exotic dancer, Chyna also appeared in West’s "Monster" video. Though she is more well known in the hip-hop world, the 28-year-old used her notoriety to create a lash and beauty bar, appropriately called LASHED, in October 2014. She also runs Blac Velvet, an online clothing store.

And Chyna is certainly proud and thankful for all that she has earned “This year was absolutely amazing! I can & will say that I am highly favored and beyond blessed to be in the position I in today. I've managed to operate 3 businesses, brand myself, and purchase/ do things I once thought were Impossible. Not to mention these things were all did off my love for my heart & soul King Cairo,” Blac Chyna wrote on Instagram in December. She said that all that she accomplished was due to her hard work:

NO HANDOUTS! NO SOB STORIES! It was hard work & dedication. If y'all think this year was something wait until the next one and the years to come after. Who's ready for 2016???

If Kardashian and Chyna are indeed dating, then the internet isn't going to hold back its opinions.