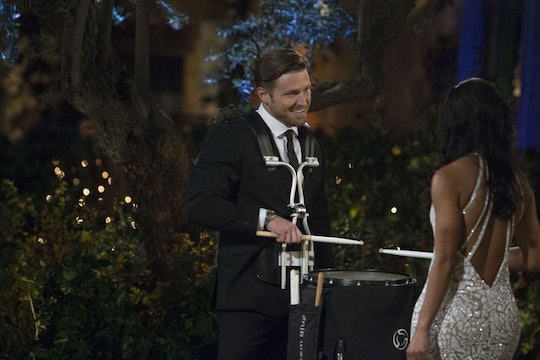 Blake E. On 'The Bachelorette' Is An Aspiring Drummer

Although it was cutting it pretty close for some Bachelorette fans waiting to get their fantasy teams together, Chris Harrison finally announced this season's contestants. There are quite a few characters in the mix. Like Blake E., the "aspiring drummer" on The Bachelorette. Poor, poor Blake E. Even Harrison couldn't resist cracking a joke at his expense, saying at the age of 31, it's time to start calling it a hobby. And we all know Harrison is never wrong. "I'm an aspiring rock singer, but at some point, at 31, you're going to have to call it a hobby and you can't say you're aspiring anymore, it just didn't happen," Harrison quipped. "But we'll deal with that later with Blake."

But hey, The Bachelorette host could end up being wrong about this. Maybe Rachael will be totally into Blake E.'s drumming aspirations and be a sticking point for her. According to his official biography, he's like, really, really into drumming. His favorite music? Anything with drums. Tattoos? "LRLL (drum rudiment)," he said. So at least he's passionate.

Additionally, like many of the other contestants this season, Blake E. has been engaged before. He said that the craziest thing he ever did was "get engaged to a crazy girl." But again, maybe Rachel, a 31-year-old attorney, will be into him. Though, personally, I'm not sure these two will end up clicking very well. Though, hey, you never know, I guess.

Blake E. will have some competition though since there are tons of professional dudes this season — like recruiters, doctors, fellow lawyers, and, of course, personal trainers. Of course, there's also a "tickle monster" and a "Whaboom" suitor ("It's a lifestyle," Harrison assures us), so maybe the "aspiring drummer" won't be the only guy without a traditional career trajectory.

However, Rachel is serious about her season of The Bachelorette. She told The Hollywood Reporter:

To be the first African-American woman is a beautiful thing. I’m honored and humbled to be the one chosen. Because that’s how I feel: like I was chosen to be in this role.

According to The Hollywood Reporter, one thing Blake E. has going for him is that he takes the premise of the show very seriously, too. In the first episode, he apparently arrives with a marching band and starts drama with Lucas for "not being on the show for the right reasons."

In her season of The Bachelor, Rachel pretty much steered clear of much of the drama between the girls, save a few eye rolls at Corinne, so while his motives may be pure, Blake E. might not want to start too much trouble at the cocktail parties and turn his possible soulmate off. Bachelor Nation will know soon enough.