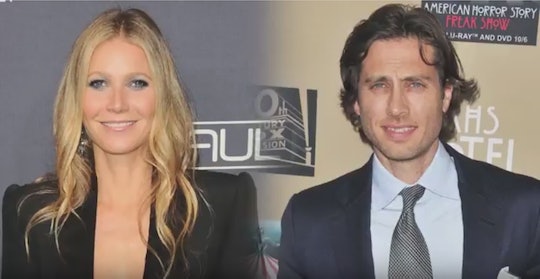 Gwyneth Paltrow Confirms Her Engagement To Brad Falchuk, & It's So Exciting

Congratulations seem to be in order for Gwyneth Paltrow: On Monday, the award-winning actor confirmed her engagement to her long-time boyfriend, Brad Falchuk. But fans of the GOOP founder may be wondering: Who is Brad Falchuk? Paltrow's soon-to-be husband works in television and has lent his words to a number of popular shows.

Paltrow and her fiancé met in 2014 on the set of FOX's hit musical comedy Glee, which Falchuk helped create with show runner Ryan Murphy and on which Paltrow had a starring role, according to The Daily Mail. The 45-year-old television executive had worked with Murphy for years, first starting as a writer for the FX series Nip/Tuck in 2003, People reported. Falchuk also worked with Murphy for two other FX series: On the horror anthology series American Horror Story as a creator and the true crime anthology show American Crime Story as an executive producer, according to People.

Falchuk won't only have a hand in American Horror Story and American Crime Story for FX — the Hollywood executive is also in the middle of filming a pilot for Pose, his next project for the channel, according to People. Pose is set in 1980s New York City and will feature one of the largest casts of transgender actors of color, People reported in October.

But Falchuk doesn't limit his talents to the television screen. The writer and producer, who has an estimated net worth of $20 million, also co-founded the education non-profit, Young Storytellers, in 1997, Town & Country reported. Falchuk teamed up with producer and manager Mikkel Bondesen and screenwriter Andrew Barrett when they were film students to create Young Storytellers after schools in Los Angeles saw funding cuts for creative arts programming, according to the non-profit's website. Falchuk now serves on the advisory board of directors.

In his personal life, Falchuk and Paltrow have a lot of similarities. He is also a parent of two children, Isabella and Brody, who he had with his first wife, Suzanne Bukinik, according to Town & Country. (They divorced a year before he met Paltrow.) Occasionally, Falchuk will gush about his kids on social media, sharing photos of his little ones on his Instagram account.

He floods his page with photos of Paltrow, as well. The latest post dedicated to the Oscar winner is an image of Paltrow eating pizza and drinking wine on her birthday. In the caption, Falchuk wrote,

This is the most beautiful woman of all time and today is her birthday. We are all so lucky that she came into the world (but no one is luckier than me). Happy Birthday, Love.

PS - this is pretty much the most #Gwyneth pic I could find - it has pizza, red wine, her phone and that f*cking perfect smile.

Paltrow and Falchuk have dated for three years, although the pair have kept the relationship relatively quiet since going public in 2015. The couple confirmed their engagement in a joint statement to Good Morning America, according to The Daily Mail. They said of the news,

We feel incredibly lucky to have come together at this juncture in our lives when our collective successes and failures can serve as building blocks for a healthy and happy relationship.

The happy pair will also appear as the cover stars of the second issue of GOOP Magazine, The Daily Mail reported. The black and white cover photo, which the Iron Man star released on Monday, shows Falchuk hugging Paltrow from behind. Both of them are wearing white short-sleeve t-shirts. The newest issue of GOOP will hit the stands on Tuesday.