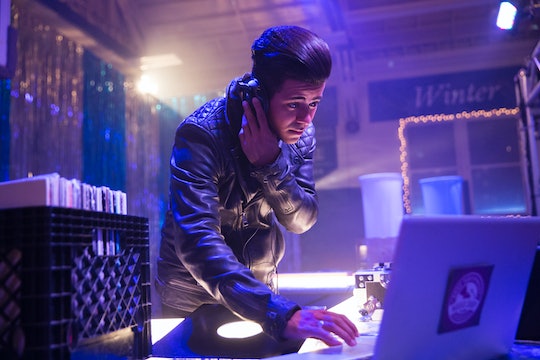 '13 Reasons Why' Introduces A New Character

(Warning: this post contains spoilers from Episode 6.) Netflix's newest series 13 Reasons Why mainly follows two characters: Hannah Baker, who committed suicide, and her friend, Clay Jensen, who is the person currently listening to the cassette tapes she left behind. On the tapes, Hannah explains the 13 reasons and 13 people who contributed to her decision to end her life. However, there's another copy of the tapes that are in the hands of Clay's friend, Tony. The show also follows Tony and his life outside school, which includes Brad. So who is Brad on 13 Reasons Why? So far it appears he's Tony's boyfriend.

Brad, who is played by Teen Wolf actor Henry Zaga, first appears in Episode 6 when he's getting a drink with Tony at the popular coffee shop in town, Monet's. After Clay accuses Tony of following him, which Tony denies, Brad asks Tony what that was all about. Of course, Tony can't exactly explain so he just says it's a secret he has to keep and though Brad begrudgingly accepts it, it's clear Brad wants to know more even though Tony won't say. Although it's not explicitly stated, it's clear that they they were on a date and Brad appears to be older than Tony.

I say this because Brad hasn't shown up at the high school thus far, so it seems fair to assume that he doesn't attend school with Tony and everyone else. What's more interesting is that Brad wasn't a character in the bestselling novel by Jay Asher which the show is based on. Therefore, not even fans who read the book first will know what Brad's deal is, although he seems truly innocent in the mystery of what led to Hannah's suicide.

For one, since he wasn't a character in the book, it's fair to assume he doesn't appear on any of Hannah's tapes. Secondly, he seems totally unaware of what Tony's in the middle of and he just seems to genuinely care about him, which is nice because Tony has been given a heavy cross to bear by Hannah. Not only is he making sure the people on the tapes actually follow the rules, he's also been a comfort to Hannah's parents throughout the series.

So it seems Brad is just a nice addition to the show. Unlike in the book, Tony has been given more of a plot on the series, which involves a look at his family and also his romantic relationships.

Suffice to say, it appears the show is making Tony more of a three-dimensional character and as far as adaptation changes goes, this is definitely a good one.