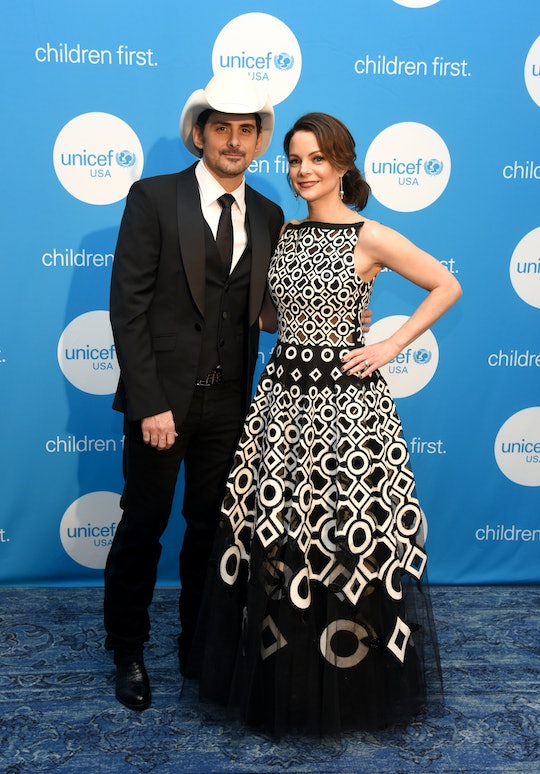 Everything You Need To Know About Brad Paisley's Wife, Kimberly Williams-Paisley

Fourth of July is just around the corner, which means it's time for fireworks shows galore. In particular, the annual Macy's 4th of July Fireworks Spectacular is a serious display and includes performances from some of the biggest names in music. Brad Paisley will be among those performing and his other half will surely be nearby to support her beau as he takes the stage. But who is Brad Paisley's wife?

You may recognize Paisley's wife, Kimberly Williams-Paisley, from the silver screen. She famously appeared in the cult-classic film Father of the Bride, as noted by her IMDb page. In fact, that's how she first caught the "Whiskey Lullaby" singer's eye, according to Taste of Country. He was on a date with another woman at 19, watching the film, when he realized he was way more attracted to the film's star than the woman he was on a date with, the magazine shared.

Needless to say the relationship with that woman didn't work out, but Paisley and Williams-Paisley are going strong. In fact, according to Wide Open Country, they've been married more than 15 years.

Their road to romance was rather unconventional, to say the least. After falling for her on-screen in Father of the Bride, Paisley told Good Housekeeping he decided to check out the sequel in 1995, telling the magazine he thought Williams-Paisley seemed "like a great girl — smart and funny." It wasn't until years later, in 1999, when he released his first country single "Who Needs Pictures," that he got to finally meet the woman of his dreams. What's more, Paisley told Good Housekeeping he cast Williams-Paisley in the video for another song, "I'm Gonna Miss Her," and the rest was pretty much history.

As for Williams-Paisley take on the story? In 2011, as Taste of Country reported at the time, she joked to CBS' Sunday Morning that the country star "stalked" her, adding: "He says it was love at first sight for him, and for me it was more like love at first month or two."

The couple married in 2003, according to Good Housekeeping, tying the knot on Pepperdine University campus in Malibu, California. The ceremony was casual, according to IMdB, the reception was "a down-home barbecue picnic," as Us Weekly reported. And in 2015, the couple renewed their vows, according to ABC News.

In their time together, the couple have welcomed two children together: 12-year-old son Williams Huckleberry Paisley and 10-year-old Jasper Warren Paisley.

Beyond her fame from Father of the Bride, you may also recognize Williams-Paisley has also appeared in The Flash, The Christmas Chronicles, The Christmas Train, Nashville, and Two and a Half Men, as noted on her IMDb page.

Brad Paisley is set to take the stage before the Macy's 4th of July fireworks show, according to NBC News, and his wife will surely be nearby, so be sure to keep your eyes peeled. If you don't spot her at the show, be on the lookout for a sweet social media post celebrating her beau's patriotic performance.