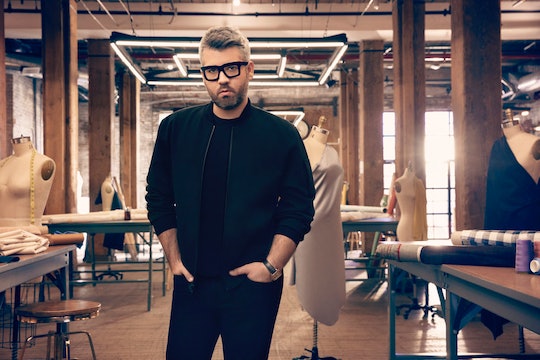 If you've been a fan of the Project Runway from the beginning, get ready because it's not business as usual in the work room this season, now back on Bravo. Longtime host Heidi Klum left the show and has been replaced by model Karlie Kloss. Mentor Tim Gunn has been replaced by designer Christian Siriano. The inimitable Michael Kors has also been swapped, for a celeb-fave designer you may not have heard of. So who is Brandon Maxwell? And, more importantly, who has worn his clothes?

Let me give you the 411. Maxwell is a fashion designer originally from Texas, but he calls New York City home now, and prides himself on creating all of his clothes locally. His brand, Brandon Maxwell is focused on making women feel "beautiful, sophisticated and powerful," according to his website. He began his career assisting stylists — the most notable being Nicola Formichetti, Lady Gaga's fashion director.

Maxwell considers Gaga a dear friend, and sometimes that means he gets to experience milestones like the Oscars with her, even just in spirit. You can actually buy the $6594 satin, black Brandon Maxwell gown she wore on Moda Operandi.

Maxwell credits the singer and actress with helping him launch his career. “I think she’s one of the most authentic, original, hardworking people, and one of the most loyal friends I’ve ever had in my life. . . . It just wouldn’t be possible for me without her," he said in an interview with Vanity Fair.

His designs have been worn by other powerful women like Michelle Obama, Oprah, Tiffany Haddish, and Queen Rania of Jordan (NBD). Let's not forget July 2018, when Meghan Markle broke the precedent she had set since her wedding of only wearing female designers, with a sleeveless yellow Brandon Maxwell dress that is now famous in its own right.

Maxwell's design philosophy seems to revolve around being an ally for women. “For a girl to get a dress off at the end of a night, pulling that zipper down by herself can be like a Cirque du Soleil act. What can I do to make that easier?” he asked in a March 2017 interview with W. I mean, can I get an amen?

He understood the importance of representation from early on in his career, which means he'll fit right in with this diverse Project Runway cast.

"The most important thing for me to know, as the protective older sibling of a bunch of sisters, is that when a young girl in the middle of nowhere comes across an image of my collection on social media, that she sees someone like herself. Not just African-American, but also Indian, Asian, Hispanic," Maxwell said in W.

He also knows he'll make a great addition to the Project Runway judging panel, and he told ET why in March. "Because I’ve only had this business for three years and I’m really in the thick of it every single day, he said. "I think the world really chooses to focus on, like, great successes, but I think life is really measured in the failures. I have had plenty of those, so I’m happy to be here to let people know what’s up."

But, that confidence doesn't mean filming the show was easy for Maxwell. As he said inVanity Fair, “It was something I was really scared to do, but I’m so grateful that I did it during the time in my life; that was a real family for me, outside of my work family.”

I, for one am really excited to meet the new Project Runway family Thursday March 14 on Bravo.