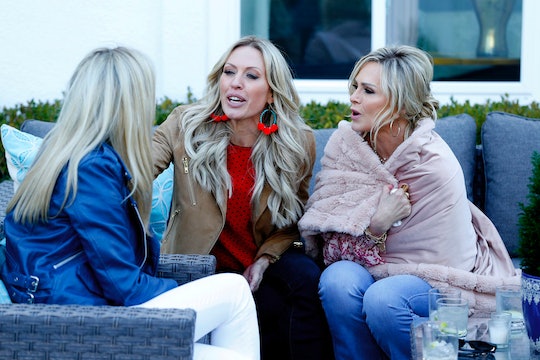 When The Real Housewives of Orange County returns to Bravo on Aug. 6, someone new will be joining the cast. New additions always have a tough time navigating the established cast dynamics, but this particular co-star already has a connection to one of the cast members. If you find yourself wondering who Braunwyn Windham-Burke is during the RHOC Season 14 premiere, then you'll soon find out: she's a friend of Kelly Dodd's.

That's what it says in her official Bravo bio, anyway. They know one another from the Balboa Bay Club. Braunwyn is married to husband Sean, with whom she shares seven children of varying ages. Eldest children Jacob, Rowan, and Bella are teenagers, twins Caden and Curran are right in the middle, and toddler Koa and baby Hazel are the youngest. Braunwyn is a full-time mom who has two nannies to assist her. She also runs the blog Barefoot in Heels (if one were being nitpicky, one might question the logistics of that; does not the presence of a shoe negate being barefoot?). On it, she writes about herself and her family in posts that she promises will be "funny, irreverent, and honest."

She discusses what she gets up to with her kids and what her pregnancies were like, as well as travel tips and outfit posts. It's typical lifestyle blogging, though one could argue Braunwyn's life isn't exactly typical.

In an interview with People, Braunwyn talked about who she bonded with most in the cast — and who she had the most friction with. As it turns out, both people were one and the same. She revealed that Tamra made her face some issues she had to deal with but ultimately brought out the best in her. She explained that the friendships of Season 14 were on a bit of a rollercoaster, with bonds being tested and shifting depending on the situation. While it sounds like her burgeoning connection with Tamra has a lot of ups and downs, it also seems like the same is true with many of the women this year.

Braunwyn went on to say that she tends to avoid conflict, which can be a tricky personality trait on a show like RHOC. Both Tamra and Shannon Storms Beador helped to pull Braunwyn out of her shell, pushing to get to know the "real" her even when Braunwyn wasn't exactly ready for that. But she viewed it as something positive in the end. She described herself as a "people pleaser" but being on the show helped her learn to stand her ground instead of running from conflict.

There may have been some growing pains as Braunwyn adjusted to being on the show, but the good times appear to have outweighed the bad. She was more effusive when she sat down to talk to Entertainment Tonight, claiming that she had an instant connection with all of the women. "I am a girl's girl," she said. "I love women, I have tons of women friends. So, you throw me into a group of women with music and tequila, and I am going to have a good time."

Fans might have just as much fun after they meet Braunwyn, because she seems like a pretty good fit for RHOC.